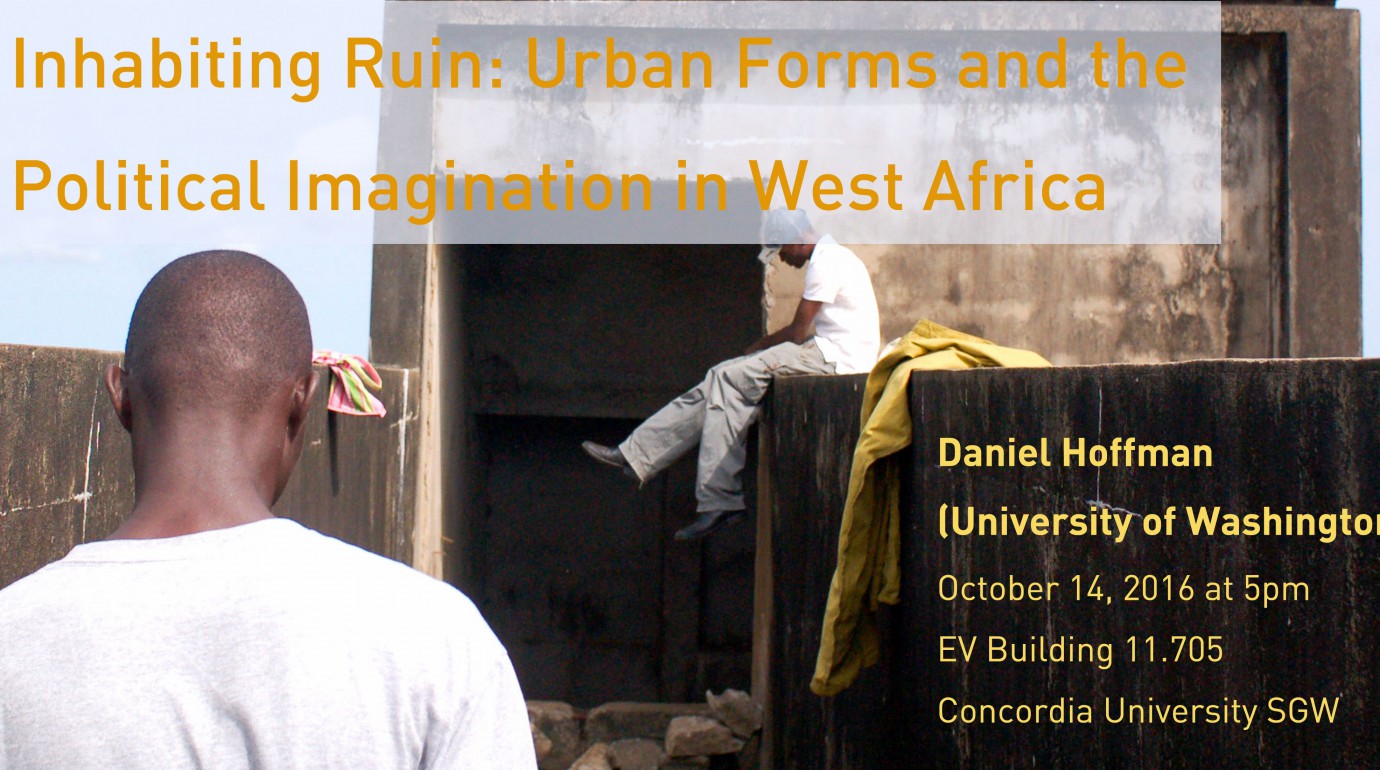 The Gem Lab is hosting two events with Daniel Hoffman (Anthropology, University of Washington) on October 14, 2016.

Students are invited to register for an informal workshop and discussion on issues related to media practice and ethnographic fieldwork. The jumping off point for the discussion will be three of Dr. Hoffman’s visual projects (one photo-essay, and two short films) that will be circulated before the event. Dr. Hoffman will discuss these works as well as issues related to his own field work, research-creation, and using media technologies as part of research and dissemination.

October 14, 2016 at 5pm (EV 11.705)
Monrovia, Liberia, like cities across the global south, is dominated by the ruins of modernist urban forms.  The so-called “International Style” once marked the city as cosmopolitan and contemporary. Today, many Monrovians inhabit the remains of this infrastructure in unintended, improvised and transitory ways.  Architects, urban designers, anthropologists, historians, geographers, photographers and filmmakers have all seen in these novel attempts to inhabit ruins a new popular politics of the city.  Drawing on fieldwork with male ex-combatants in Monrovia, many of whom live as squatters in the city’s ruined infrastructure, “Inhabiting Ruins” is an effort to understand the limits of this emergent popular politics.  With a particular emphasis on the camera as a research tool, the project is a multi-media effort to understand the lived experience of contemporary African urban space.

Daniel Hoffman’s teaching and civic engagement are based primarily on ethnographic research in West Africa and on shi background as a photojournalist working in Southern and East Africa. Since 2000 he has conducted fieldwork in Sierra Leone and Liberia on issues of youth mobilization during and after those countries’ recent wars.  The resulting research explores how young men participate in regional networks that make them – and their capacity for violence – available for various forms of work. These include labor in the region’s resource extraction industries, labor on battlefields across West Africa and the labor of violent political campaigning.

Dr. Hoffman’s work in visual anthropology concentrates on the scholarly, artistic and popular representations of violence in still photography.  The aesthetics so often used to represent African conflicts make simplistic portrayals of the continent unavoidable.  In response he experiments in his own scholarship with the aesthetics of visual and literary ethnography, researching the work of African photographers and artists in an effort to develop alternatives for the representation of violence.