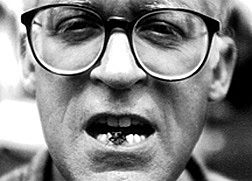 One of the most prolific and iconoclastic filmmakers is coming to Cinema Politica-Concordia.

Jon Jost, creator of over thirty independent and experimental works since the 1960s, will screen two of his films and field questions from the audience on Friday, September 19th at 7:30 in H110 (1455 Maisonneuve Boulevard W.). Cineastes interested in political filmmaking with little regard for conventional methods won’t want to miss this chance to interact with a legend in the field.

The evening will include a screening of the 2007 feature Over Here (74 minutes), a digital work expressing the troubled return of an American soldier from the Iraq War. Through fragmented and poetic turns, the film is a companion piece to two other Jost features, Homecoming (2004) and Parable (2008), which together form a trilogy of critiques on Bush-era America. Also scheduled for screening is a 1970 short, Canyon (5 minutes), a fixed-shot experiment utilizing dissolves that elicits uncanny visuals of a familiar American landmark.

This free screening is open to the public

“An American maverick who was expelled from college and spent time in jail for refusing the Vietnam War draft, Mr. Jost has carved out a distinct presence in the independent film circuit. He has worked outside of Hollywood his entire life, choosing artistic autonomy over corporate oversight. His films have screened in several major festivals, including Venice, Berlin, and Rotterdam, and represent some of the most politically and aesthetically radical cinematic works from the last fifty years. In 1991, his films were screened in a retrospective for the Museum of Modern Art in New York City, a showcase that has since traveled around the world. A one-time Distinguished Professor at Yonsei University in Seoul, South Korea, Mr. Jost, who describes himself as “independently poor,” has returned to his nomadic filmmaking ways, continuing to produce and lead workshops in experimental digital cinema.” 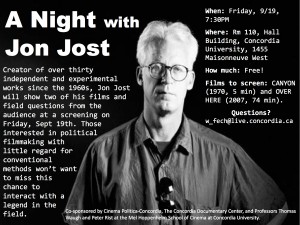