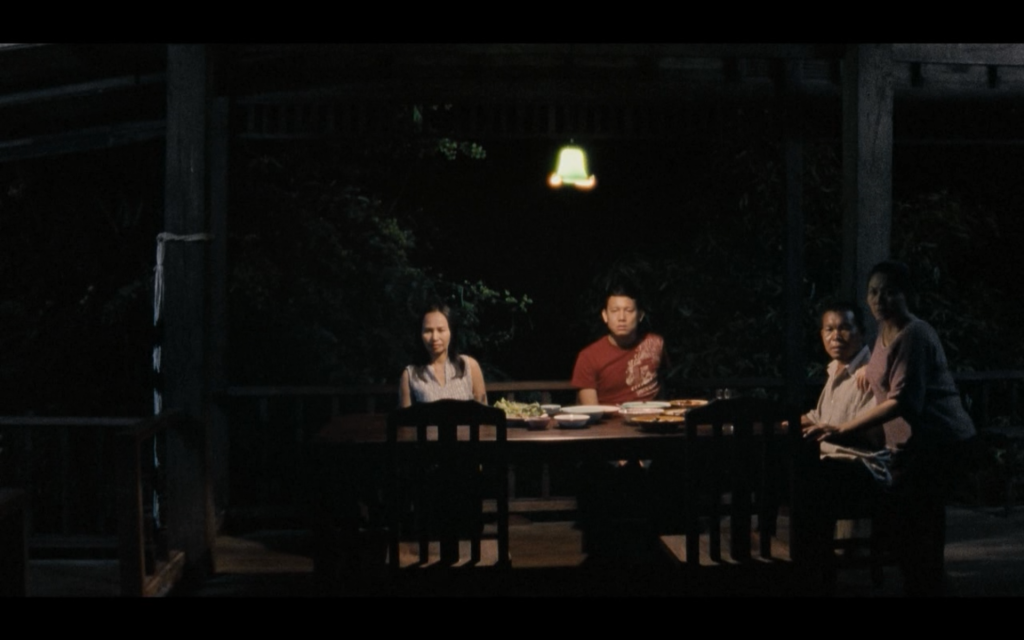 One of the final panels of day one of SCMS, “The Care for Opacity in East Asian Cinema,” was comprised of a group of four Montreal-based scholars: Erik Bordeleau (Concordia University), Dr. Sivestra Mariniello (Université de Montreal), Suzanne Beth (Université de Montreal) and Adam Syzmanski (Concordia University). Both Syzmanski and Bordeleau work with Concordia University’s Sense Lab. Bordeleau, the chair of the panel, started by conducting a cosmopolitical reading of Tsai Ming-Liang’s installations in his paper titled, “Tsai Ming-Liang and the Cosmopolitical Slowing Down of the Soul.” This included a fascinating discussion of Tsai’s collection of old chairs found in Taiwan, and their virtual oil painted counterparts.

Adam Syzmanski presented a paper titled “Composing Peace through the Ecosophic Aesthetic of Apichatpong Weerasethakul’s Uncle Boonmee Who Can Recall His Past Lives.” Apichatpong Weerasethakul is a media media artist, working with film, photography, and installation. Syzmanski explained that the Thai filmmaker’s working through the legacy of anti-communist killings comes from a collective melancholy and a need to bring back disappeared, historically repressed peoples. Uncle Boonmee Who Can Recall His Past Lives presents the jungle as a site of alterity. Syzmanski employed Deleuze and Guattari’s concept of the ‘ecosophic’ as a means of responding the ecologies in the film world, which registers various life forms. He explained that ecosophy is the “practice of doing through artistic expression and aesthetic composition.”

Syzmanski, in a close textual analysis of the ‘veranda scene‘ from the film, used the concept ‘découpage’ to understand the arrangement of the shots that are driven by ghosts, far-off sounds and animals. He argued this arrangement is irrational to the human subject. Szymanski briefly discussed the ‘Wellesian’ use of découpage and shooting in depth; the character action is multiplied with each plane in focus. The cutaway shots in Uncle Boonmee break away from an anthropocentric structure. The event of dinnertime is the locus for the emergence of difference. The entrance of Boonsong, Boonmee’s deceased son, as a monkey ghost brings forth the past as an ecological factor and makes felt the activity and agency of the surrounding environment. Ecology, Syzmanski argued, is felt through the découpage. An emphasis was made on the collective recollection of the past, as it does not only belong to Boonsong. To conclude, he explained that the presence of the repressed composes with the reality of the present and the remnants of the past are made present.

Suzanne Beth followed Syzmanski’s presentation with a discussion of communion scenes within Ozu’s films. Her paper titled, “Ending Ozu’s Films: Bodies Standing for an Explanation” investigated moments of two characters standing or sitting side-by-side. The respondent, Dr. Silvestra Mariniello, was struck by the similarity of the questioning in each of their papers, and their preoccupation with of finding resistance in film against institutionalized violence and power. She also wondered if they could access these same kind of discussions of time outside of East Asian cinema. Szymanski, in response to this, suggested that what these three directors have in common is their relationship to global art cinema and the festival circuit, and their somewhat removed position within their own national cinemas.