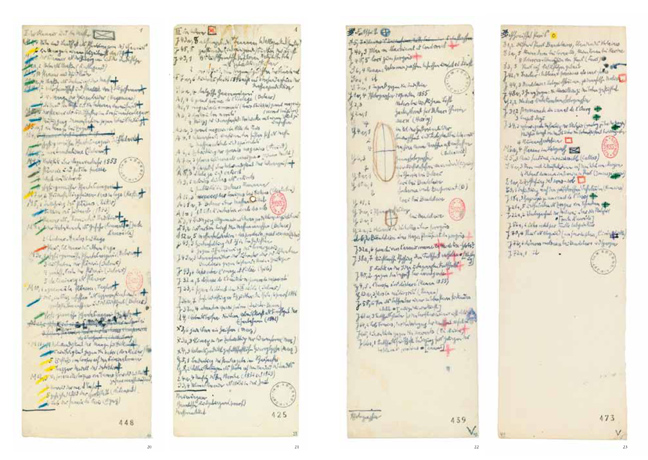 No stranger to the works of Walter Benjamin, Catherine Russell continued her extensive research into the philosopher’s writings in her presentation “Walter Benjamin, Archiveology, and Critical Film Practice”. Through a close analysis of the structure and content of Morgan Fisher’s experimental film Parenthesis (), Russell theorized how some of Benjamin’s observations can lead to new insights on archival films and express them within the new language spoken in this experimental work.

A key term that Russell coined—based on Benjamin—within this new language is “Archiveology”, which she describes as a process that is deeply rooted in history and invokes the interface of human and machine whereby the survival of the human consensus is not lost within them. Archiveology is clearly manifested in Fisher’s Parenthesis, which is composed entirely of series insert shots that are sorted using a secret rule that the filmmaker refuses to divulge. As Russell suggests, insert shots are typically low in the hierarchy of narrative information. Parenthesis liberates them through the secret rule, as the artist is essentially a machine designating an algorithmic process, as Fisher suggests, “the artist didn’t make the art, the rule did”.

Nevertheless, Fisher did acquire these images himself. These clips may be abject fragments that fail to entice us to desire their original placements, but their new nature can be expressed within Benjamin’s insights into the archeological strata, whereby the transmission of these images devoid of memory traces provoke jolts of memory experience in the audience. As a critique of commodity culture, Parenthesis also displays the phantasmagoric within media culture, as there remains a violent subtext to many images that comprise the film. As Russell concludes, these images are dialectical, engaging in commodity and collective memory, synthesizing a new form of knowledge that arises from the archive and this experiment.

While there is still much to be learned from Benjamin’s work, it is clear that Archiveology produces allegorical collective experiences of media, a new language that filmmakers are only just beginning to speak.