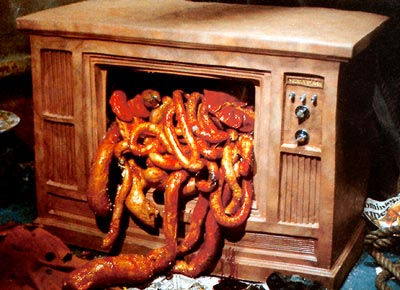 Monstrous Media: Hybrids, Aberrations, and Other Unclassifiables
The NYU Cinema Studies 2014 Graduate Student ConferenceThis year, the NYU Cinema Studies Graduate Student Conference invites papers that focus on Monstrous Media. By ‘monstrous’ we designate that which defies intelligibility, offends taste, or disturbs perception. By ‘media’ we refer to moving image materials from a wide variety of media platforms and networks. Monstrous Media therefore seeks papers on a wide range of subjects: from the affects of shock, revulsion, and terror engendered by horror and science fiction to the freaky fetishes, unseemly desires, and strange bodies that figure in pornography and medical films; from political projects of ugliness, displeasure, and excess in experimental art to off-putting glitches, errors, and interruptions in mass media products; from the miscegenation of media forms and texts by collage and compilation to the scrambling of high and low by YouTube and mixed media practitioners. Equally, the conference invites papers that actively seek to scramble settled histories of film, television, and new media: repressed backstories, disavowed genealogies, and censored celluloid reels.NYU’s graduate program in Cinema Studies invites submissions to our annual student conference Monstrous Media: Hybrids, Aberrations, and Other Unclassifiables hosted at Tisch School of the Arts on February 14-15, 2014.

Topics may include, but are not limited to:

•   Controlling the margins of the monstrous (geographically/colonially, metaphorically, etc.)

• Static and noise on VHS and cassette tapes

Paper proposal submissions (250-300 words) along with a short biographical statement indicating institutional affiliation should be sent by December 2nd, 2013 to cinecon2014@gmail.com.

Acceptance notifications for participants will be sent by the end of December.