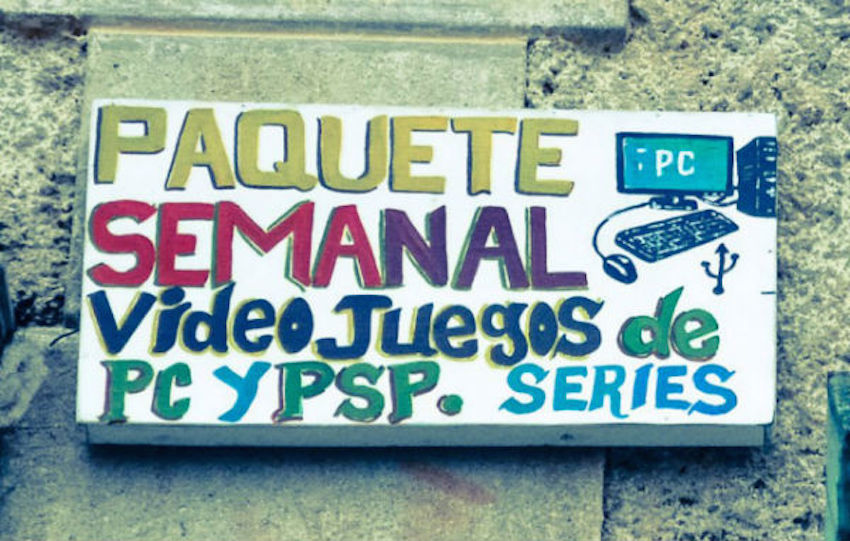 Two days shy of Valentine’s Day, Laura-Zoë Humphreys—Assistant Professor at the University of Manitoba—was welcomed to the Global Emergent Media Lab by a group eager to hear the thoughts of one of the few outsiders to have potentially uncovered some of the inner workings of El Paquete Semanal (the weekly package), the notorious underground network of pirated media in Cuba. As the second speaker in the Digital Ethnography Series, Humphrey’s talk titled “Utopia in a Package? Digital Media Piracy and the Politics of Entertainment in Cuba” was an overview of her preliminary research into the social, political, and economic ramifications of Paquete, specifically in regards to modernist allegories that may reflect and contradict Revolutionary ideals.

Many factors have contributed to Paquete’s surge in popularity and rapid expansion; none more so than Cuba’s lack of Internet providers and general ambivalence towards media piracy as a way of life. Under Castro’s rule, piracy became a semi-legal practice as small businesses hijacked satellite signals and sold physical copies of popular media on street corners, a common sight that openly mocks copyright legislation. Accompanied by the decreasing cost and portability of storage, digital piracy created a new proliferation of small businesses specializing in different content, and El Paquete Semanal was born.

While the operation is shrouded in secrecy, Paquete is purportedly led by two individuals: an engineering student, and a music producer nicknamed “El Transportador”—his propensity for stunt driving and kicking people in the face are also unknown. Terabytes of material are downloaded off of hotel Internet or ripped directly from satellite frequencies, placed on hard drives, and distributed to a network of sellers through public transit. Content varies to include independent and Hollywood films, Korean soap-operas and the most recent episodes of Game of Thrones, but in this state of quasi-legality, at least one rule remains: no porn or political stuff, which would draw too much attention—a very interesting display of an illicit practice becoming licit through self-policing.

As Humphreys makes clear, there are both positive and negative connotations associated with this practice. Under a US embargo, piracy essentially became the sole means to access media flows from which the peoples of Cuba were excluded by censorship and dictatorial control, bypassing state sanctioned media to allow a luxury of choice. Moreover, Paquete and similar practices create effective entrepreneurs and tasteful consumers, inciting autonomous thought and action—a key result to revolutionary tactics.

However, these same arguments could be seen negatively as this network of material is swept up and shaped not only by Western currents, but global flows. The ambivalence towards this practice that excludes political content can have ideological repercussions, keeping people entertained and docile—in opposition to revolutionary ideals.

Vistar magazine, in association with El Paquete Semanal, embodies these oppositional forces by defining and innovating what popular culture is in Cuba. Assembling the best of Cuban entertainment every month, Vistar also presents new opportunities in effective advertising—a relatively new practice for this area. While the magazine and Paquete may participate in the re-education process through aesthetics, it does so in a way that greatly impacts cultural identities by fostering consumer culture.

In the future, Humphreys hopes to further explore the dynamics of these expanding advertising practices, as well as this hierarchy of taste–especially how genres fit into socialist habits and new forms of cultural construction.