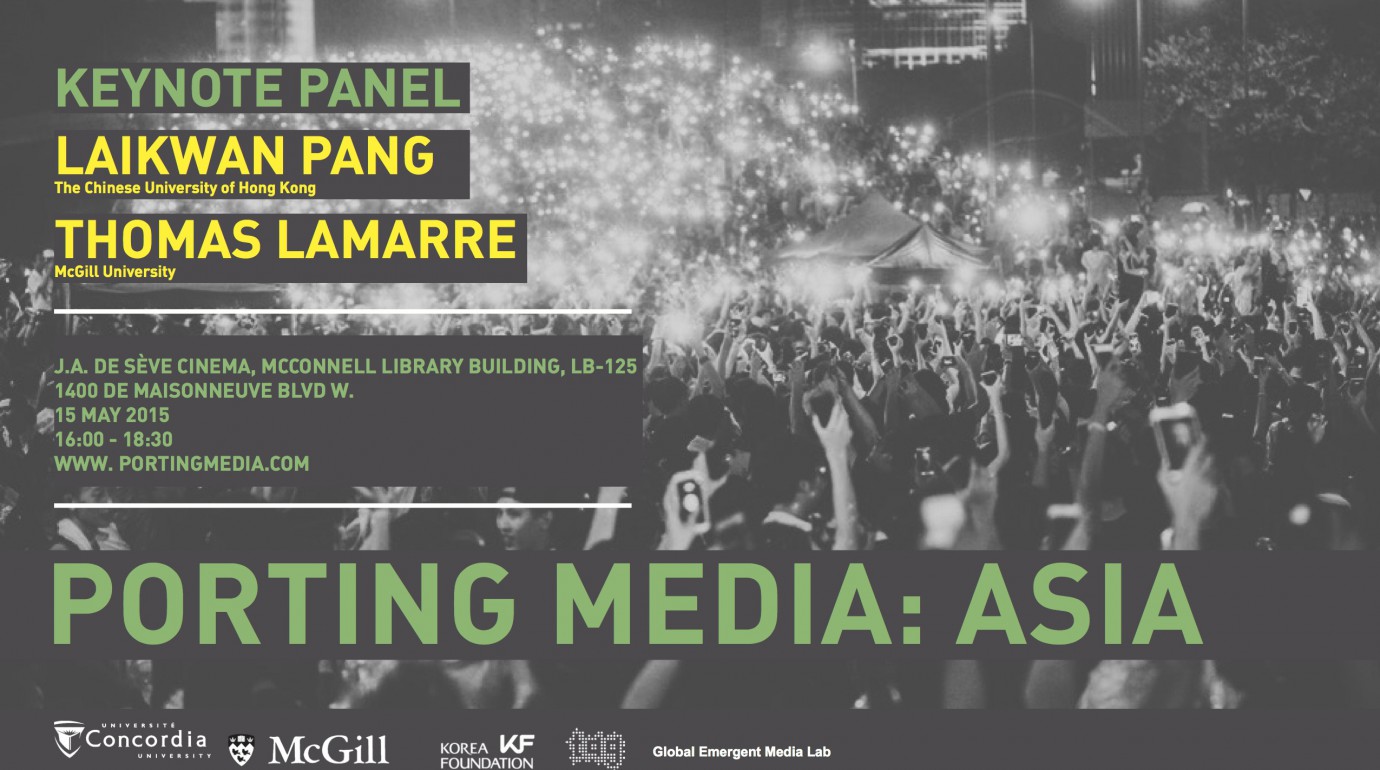 On Friday, May 15th, Dr Laikwan Pang (The Chinese University of Hong Kong) and Dr Thomas Lamarre (McGill University) delivered a pair of engaging and complex keynote lectures to kick off “Porting Media: Asia”, a three day conference/workshop investigating the infrastructure, circulation, and practices associated with portable technologies in Asia.

Dr Pang’s lecture, titled “The Social, the Private, and the Political: The Use of Social Media in Hong Kong’s Umbrella Movement”, was admittedly a topic held close to heart, as emotional and political reverberations from the Umbrella Movement continue to be felt since its assurgency in 2014. It is precisely these thought processes that are at the core of Pang’s lecture, as emotional reactions became synonymous with political thought and action found within dialectal processes in the use of various social media platforms, which included Facebook, Whatsapp, Wechat, Youtube, and Telegram. Building a foundation on political theorist Hanna Arendt’s definition of the social realm, which allows the private sphere to invade the public sphere, Pang suggests that the flow of information online became entangled with the overflowing of emotion, transforming social media into political media. Reactions varied from violent protests to passive gatherings, which were simultaneously romanticized and politicized, including a fandom-created “bromance” between two friends who unwittingly became youth leaders and symbols for a new generation who wished to demarcate from a passive status quo.

Dr Lamarre’s lecture, titled “Everyday Media Comportment: Living Between Infrastructure”, investigates several ways in which portable media and social media problematize the traditional point-to-point and one-to-many modes of information delivery. Lamarre suggests that Japanese mobile phone culture, commonly referred to as Keitai culture, operates between these two modes associated with networking and broadcasting as a form of anti-production. The broadcast tower and commuter train network become paradoxical, synergistic landmarks that produce outward working forces through the displays of creativity and destruction from users—a tweet surge may be interpreted as both a positive and negative reaction to a product. Furthermore, apocalyptic scenarios are prevalent in video games and other media, often depicting cellular phones as tools of empowerment to fight an alien invasion or stop cosmic destruction. Through the use of these phones, the user becomes one with the broadcast tower and the digital commuter network as an extension of their own experience.

Concentrations on movement, spatial mapping, and information reception may have linked their individual lectures, yet Dr Pang and Dr Lamarre denoted two polarizing reactions to their respective objects within their usages of social media and portable technologies. As these keynote lecturers may attest, the adage “with great power comes great responsibility” comes to mind when one considers the equally constructive and destructive potential that lies within mobilized groups in digital networks, especially those with strong social and political causes that can lead to disparaging results. Surges in in social media practices may be fleeting moments of politicized emotion, yet their lasting temporal and spatial impacts represent a critical opportunity to problematize, quantify, and possibly redefine private, public, and social experience within this globalized digital age.