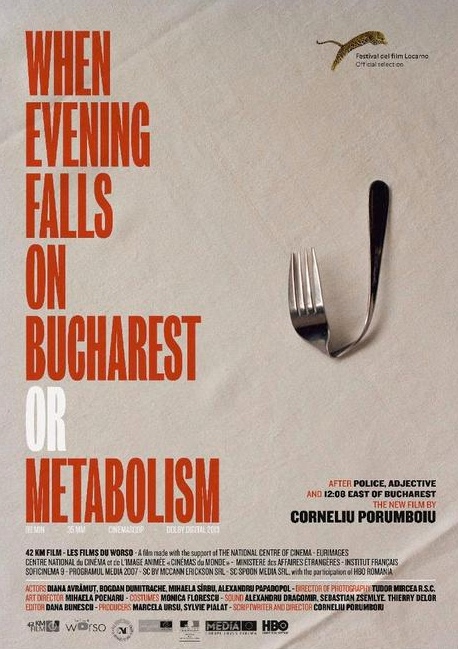 The Festival du noveau cinéma is upon us, and it has been the perfect distraction for a displaced cinephile over Thanksgiving weekend. Here are some sketches on the films that I’ve caught up with so far, with hopefully more to come over the following week:

Sion Sono’s Why Don’t You Play in Hell? plays out like a marriage between Takashi Miike and Fellini’s 8 1/2 (1963), though I’m not sure if this comparison accurately captures the topicality of the prolific Japanese provocateur. The film is a mise en abîme of genre references (music cues recall Godard and Le mèpris [1963]) and narrative states, constantly oscillating between present and past. We see this each time a character is introduced, as well as in the form of dream/fantasy states and intradiegetic film productions, through which Sono constantly asks: what is this film we are watching? The incessant destruction of sliding doors is an appropriate metaphor for the subtlety which these ideas are approached. There is no elegant hall of mirrors or menacing funhouse – Sono wields his camera as a stylistic sledgehammer. It’s all in good fun, and the temporal ambiguity detracts from any overtly rhetorical message of reviving 35mm production and the reversal of film history.

Another alumni of this year’s Midnight Madness program at TIFF and playing in the Temps Ø strand, Hitoshi Matsumoto’s R100 is as weird and wonderful as Sono’s film but with a comedic sensibility more akin to Jacques Tati, Takeshi Kitano or Elia Suleiman. The protagonist attempts to address the maternal absence caused by his comatose wife by enlisting the services of a bondage club that will, for a year, surprise him with impromptu submission by dominatrixes. The abrupt violence and humiliation of these instances are humorously contrasted with a sepia palette (startling after the anarchic red and yellow of Why Don’t You Play in Hell?) and the meek demeanour of the submissive father. The themes of violence, sexual pleasure, and musicality converge in a conclusion that locates the nexus of these concepts in the cinema screen; specifically, spectatorial pleasure. Ode to joy, indeed.

L’étrange couleur des larmes de ton corps (Hélène Cattet & Bruno Forzani) is a highly aestheticized feature built around a kaleidoscopic structure. With the generic conventions (and clichés) of giallo as a point of departure, the film eschews narrative comprehensibility and emphasizes fetish objects such as knives, leather, flesh, architecture, and – of course – lots of blood. The most interesting achievement of Cattet and Forzani’s uneven film is the artful use of color and sound. Not only does the film emphasize sanguinary red, but textured black-and-white flashbacks and vivid optical color. At times rationalized in the diegesis, such as in a photo processing room, or not, during a green-lit, extended nightmare scene as someone attempts to break into the protagonist’s apartment. The sound design is regularly detached from the fragmentary images that the filmmakers compose with, often heightened and complimented by a score that is pure homage. In one sequence, a close-up of a rotating tape reel dissolves into a matched extreme close-up of the main character’s eye. With this edit, Cattet and Forzani make explicit our tenuous construction of the narrative through their visual and auditory shards.

Corneliu Porumboiu’s immaculately refined When Evening Falls on Bucharest, or Metabolism arrives as the perfect, sobering antidote to the maximalism of the films of the Temps Ø sidebar. Porumboiu has previously disrupted meaning and definition from history in 12:08 East of Bucharest (2006) and law in Police, Adjective (2009), and one expects ceaseless interrogation and bickering over semantics from his work. The Romanian auteur continues his minimalist trajectory, this time discoursing issues cinema and relationships in a mere seventeen shots (plus credits) over the course of the film’s ninety minute runtime. Porumboiu’s style takes on a purity, stripping cinema of most of its spectacle: no musical score, spare/geometrical sets, and, of course, depriving us the viewing the film-within-the-film actually being shot. This approach brings its own fundamental cinematic pleasure; we crave an interruption or difference from the monotonous shots from the backseats of cars driving around Bucharest or a scene rehearsed ad nauseum. In the middle of the film, the diegetic filmmaker and his actress lover enjoy a cigarette outside at night in a static two-shot. The cigarette smoke and falling ashes take on a kind of ecstasy, with the actress’ first cigarette in the film suggesting a momentary sense of vulnerability and honesty. The dialogue extends this sensation; for the only moment in the film, the argumentative banter ceases and both characters approach the fleeting nature of their affair. This bracing honesty could only be achieved in the specific cinematic model utilized by Porumboiu.

Gianfranco Rosi’s dark-horse Golden Lion winner, Sacro GRA, is equally unassuming in its construction and gentle humanism. A cinéma vérité account of the ring road that circles Rome, Rosi’s documentary follows the lives of those maintaining a similar marginal and geographical position: strippers, gypsies, low-income families, paramedics and a scientist trying to protect the native palm trees from pests. We spend so much time with these interesting figures, all organized through familiar camera angles and distance; for example, high-angle long shots of an old man in his modest apartment act as our only access to him. When the location is re-established with shots of the road, it is disorienting. The film doesn’t pass judgment or come to any kind of discernible conclusion, for that matter. However, in its final moments the quiet power of Sacro GRA takes shape as it becomes apparent that, excepting the scientist whose raison d’être is fulfilling and metaphorical, all of the other subjects exist in pairs or family units. This compassionate choice conveys a sense human connection, even when backgrounded by the rest of Roman society.

In a sense, Hong Sang-soo’s fifteenth feature and his second this year alone, Our Sunhi, is my personal centrepiece of the Festival du nouveau cinéma and a film of considerable interest. Obviously no radical departure from Hong’s existing preoccupations with love triangles, filmmakers, film professors and film students and structural play, this latest work eschews the ontological instability foregrounded in In Another Country (2012) and Nobody’s Daughter’s Haewon (2013). It would be very convenient to dismiss the film as light or inconsequential but there are a number of developments of interest, beyond its status as one of the South Korean auteur‘s funniest films. The film sets up a love quadrangle between the female lead Sunhi (akin to his other production this year), her professor, a friend and a former lover. The narrative knots itself as the connections unfold; Sunhi encounters all of her suitors within the first rotation of the film, with the same spaces and one particular song being repeated as the friend meets the lover, the professor meets the friend, etc. The narrative geometry of the film then shifts with each asymmetrical encounter. Sunhi herself is an interesting figure, as she plans to go to graduate school in the United States and consequentially escape Hong’s galaxy of representation in which women are courted by unsuccessful men. She does not appear as active an figure as Haewon, but is given equal focalizing worth as a member of the film’s quartet of characters. The final geometrical shift in the film is hilarious and also casts a new light on Sunhi’s agency.