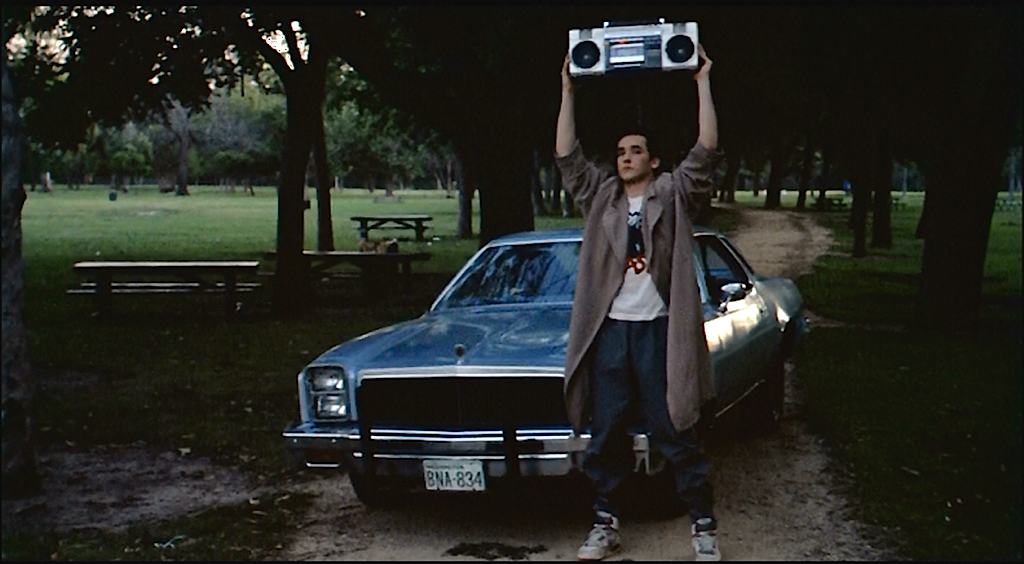 We here at Grad/Aperture are excited to kick off a new weekly feature that showcases a single frame from films that have influenced the eclectic tastes of our colleagues in the MA and PhD Film Studies programs.

The Scene: After preemptively breaking up with aspiring kick-boxer Lloyd Dobler (Cusack), Diane Court (Skye) lies in her bed, haunted by the song they once shared on the beach in the backseat of his car, Peter Gabriel’s “In Your Eyes”. She soon realizes that the song isn’t just in her mind; Lloyd is standing outside, arms outstretched high above his head as the song blares from the boom-box in his hands.

The Legacy: a 21st century window-side serenade, this iconic image is surely one of Cameron Crowe’s most memorable. As the scene cuts back between Lloyd and Diane, the camera moves delicately closer and closer to Dobler and the music rises. Cusack and Court’s performances scream out with restrained passion and frustration, as Diane tosses and turns in bed and Lloyd clearly struggles to keep his arms outstretched, a look of nervous determination on his face, willing her to look out the window. She doesn’t, which makes it all the more heartbreaking.

An inspiration for all the good romance-centric movies for over 25 years, this one continues to hit you where it hurts, and it hurts so good!