Today, we bring you Part I of MA student Julie Brousseau’s interview with Katie Russell, PhD, Professor of Film Studies, and  current Chair of the Mel Hoppenheim School of Cinema, conducted last semester, on September 27, 2017.

Julie: How long have you been a Professor of Film Studies at Concordia?

K: That’s a very difficult question [pauses] I have many interests. Over the course of twenty-seven years, my interests have been in constant flux. I’m always learning things. You know, I teach experimental films, I teach documentary films, I teach Hollywood films, I teach theory and methods, I like all of those! I like to mix them up, to have a balance. So, I can’t say that there is any particular thing I like.

J: So, Film Studies in general?

J: What are some of the courses you teach at Concordia?

K: I’ve been teaching quite a number of times a course called Archiveology, which has become the title of my [latest] book. 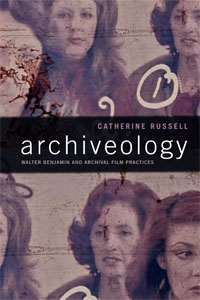 I taught it in seminars starting in 2008, when the PhD [in Film and Moving Images Studies] program began. In this case, I worked out my ideas in the classroom with the students. I also used a very similar process with students from the MFA program for a previous book, called Experimental Ethnography. So, these are two courses that I have taught repeatedly, always making changes as I learn and as the field evolves. It’s mostly a learning process.

I taught Hollywood courses like Film Melodrama, Hollywood in the ’50s [pauses] I did teach the Western once, which is a course I’d like to go back to one day. There’s so much to say and do about that genre! I’m also teaching a course [this] term called Cinema and the City, which again is something I’ve taught quite a few times before. It’s a course that lets you touch on different types of film practices and do interdisciplinary readings, so you can go in many directions. I like to teach that subject because, as when I teach Walter Benjamin, everybody finds a different access point. In that sense, it’s very open.

I also taught Methods for a decade. I’m happy that I have colleagues now that can teach Methods, although I still enjoy doing it. It’s a fun course to teach, for similar kinds of reasons: it’s open; you can do many different things in the course of one semester, as opposed to a more focused course; and you can work in a metacritical way. My courses are all a little interdisciplinary and open to different approaches, but they all do feature a lot of good movies.

J: Why did you decide to pursue your career in Film Studies?

K: Well, that was a long time ago. To be perfectly honest, in the 1980s, when I was in graduate school, I was fairly confident that I would get a job [laughs]. I mean, I really enjoyed it obviously. I learned about Film Studies at the University of Toronto, but it was not a full-fledged program and I ended up getting a degree in Philosophy. I was so interested in Film Studies that I wanted to do it as a Graduate student, but there were no PhD programs. There was also no Master’s program [in Film Studies] in Canada, so I had to go to New York. But I knew enough about how Universities worked that I was quite confident that there would be job opportunities for me, because I would be one of the first people who had a PhD in Film Studies. Sure enough, I had my choice of jobs [laughs]. That was then, you know.

I enjoyed Film Studies because I found philosophy to be too disconnected from everyday life. But I found Film Studies itself, the way that it was taught at the University of Toronto at that time, was a little too narrowly focused on great directors, genres and stuff like that. I didn’t think that was really interesting, so I didn’t actually end up with a degree in Film Studies, but I took several [film] theory courses. Then, I started writing film theory in my philosophy classes and that made the philosophy way more interesting [laughs] even if I didn’t get very good grades because I was in conflicts with my professors at that time. They wanted me to do philosophy, but I wanted to do film theory. Then I realized I can go to graduate school and work with Annette Michelson, who I thought could be my mentor, but that’s another story [laughs]. You know, these were names I recognized. I read texts by these people, and here they were teaching! It’s the same reason now why people choose certain graduate schools.