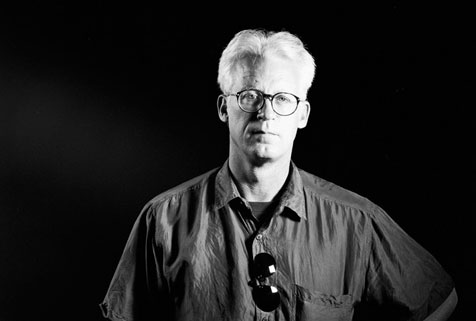 I was lucky to help bring to Concordia one of the more radical experimental and independent filmmakers working today. Jon Jost, a U.S. American with over 60 feature-length and short film credits to his name, screened two of his films and fielded questions from the audience during an event co-sponsored by Cinema Politica and Professors Thomas Waugh and Peter Rist at the Mel Hoppenheim School of Cinema on Friday, September 19th. Jost, who’s been making films since 1963, screened an early celluloid short, CANYON (1970), which condenses an entire day of footage at the Grand Canyon into a five-minute dissolve sequence (beautiful), and a more recent digital feature, OVER HERE (2007), which expresses the troubled return home of an Iraq War vet to Oregon.

About 30 people attended the event—a strong number for a Jost affair on a Friday night. Though walkouts are not uncommon with Jost’s films, which stretch audience patience and eschew easy comprehension, the crowd never thinned this particular evening. I conducted a post-screening Q&A wherein Jost shared details of making both films and broader principles that have guided his work for over 50 years. A social and political iconoclast who doesn’t mince words, Jost spoke of his aversion to conventional filmmaking (“Any film with an over-the-shoulder shot doesn’t interest me”) and cited his refusal to work within the dominant channels of filmmaking and distribution, favoring autonomy and poverty to oversight and wealth. One of his best comments was an analogy he provided expressing the difference between traditional Western narrative styles (akin to Chess with highly structured, predictable pathways of movement) and his own, which he likens to the Chinese game Go in that he builds meaning slowly, piece by piece, until a sensation or understanding coalesces with one final gesture. Audience members asked several questions and a few even purchased Blu-Rays of Jost’s films, which he tows with him to screenings and lectures.

Jon was in Montreal so he and I could sit down for an interview as part of an essay I’m writing for an upcoming retrospective of his work at the Mary Riepma Ross Media Arts Center, an art house film theater in Lincoln, Nebraska, where I once worked and first met Jon in 2007. I was commissioned by the Ross to write the essay with the understanding that it might expand into a book, which—shockingly—would be the first devoted to Jost’s films. I intend to write that book. For now, though, I’ve busied myself with composing the essay and planning the films to feature in the retrospective in November. Jon has made available his entire feature-length oeuvre to me—a veritable treasure trove of cinema at my fingertips. I think Jon’s visit to Concordia earned him new followers; hopefully my further research will add to that number.