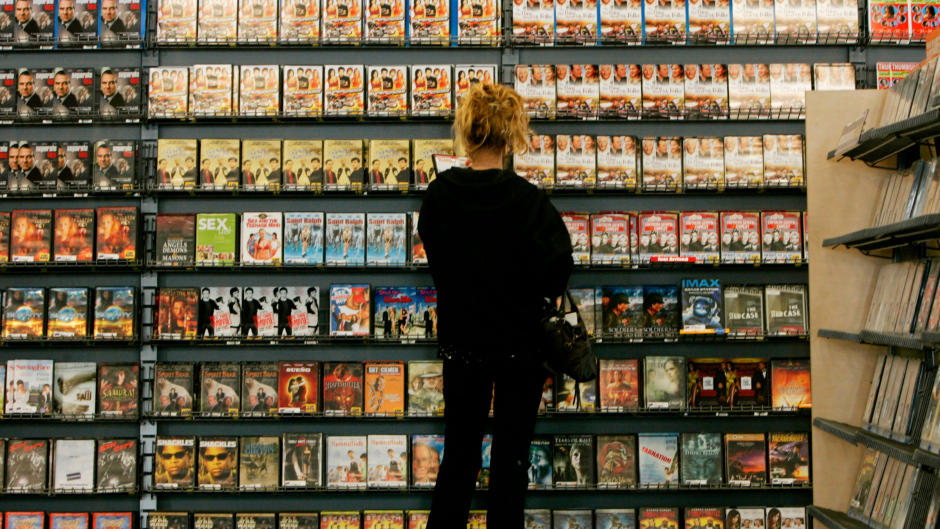 As a former video store clerk (I am sure several others in the audience were, as well), the lecture hosted by ARTHEMIS on Friday, November 7th was a nostalgic one. Dr. Daniel Herbert presented a lecture titled “On Film School and the Strip Mall: Video, Video Stores, and the Thresholds of Cinematic Knowledge.” The lecture dealt with issues of taste and the relationship between the Ivory Tower (the university) and the checkout counter (the video store). Having worked at Blockbuster for three years while completing my undergraduate degree in film studies, this dynamic is one I had pondered on many occasions.

Herbert explained that the video store changed how movies were thought about in terms of their value, material, and spatial representation. The division of movies into categories gave the clerk a spatial understanding of film. Specialty stores further divided their movies into sub-categories, such as directors, stars, and country of origin. This demonstrated a more sophisticated understanding of film history than corporate stores. Using Furnham’s conception of lay theories, Herbert showed how this arrangement of movies produces ideas and generates knowledge.

Herbert continued by quoting Pierre Bourdieu’s phrase, “Taste classifies, and it classifies the classifier.” He explained how video stores could be further classified into different types. Dividing the video store into three categories – corporate, corporate model independent, and specialty – Hebert explained that the video store could be understood as a spatial cultural text. Within the space there is the browser and the clerk. The spatial representation of movies in video stores allows them to be pondered or considered by the browser. The type of video store the browser goes to, whether corporate or specialty, reflects the conception of cinema the person already holds. The clerk’s aim to is make a good match between the customer and the movies, as a custom of social exchange. Herbert explained that, generally, clerks were either teens, with little knowledge of cinema, or cinephiles, whose knowledge of cinema was too refined for the everyday renter.

A comparison of cultural exchange in the university and subcultural exchange in the video store lead Herbert to four case studies of establishments that have shifted toward an educational model as consumption tastes continue to change. Video Rodeo, located near the University of Florida, was an outgrowth of the academic experience. The founder, also a professor at he University of Florida, arranged movies in a layout in which knowledge could be generated. Here, he spoke of the video store clerk as a cinephile and gatekeeper of “good” movies and belief held by the store’s founder that exposure to alternative film titles would inspire customers to view them. Alphaville, located in Albuquerque, he explained briefly, is an example of store that donated their collection to a university upon their closing.

Vidiots and Scarecrow have become non-profit organizations and shifted their focus toward film education. Vidiots has created a semi-formal film education centre that evolved from their screening room, The Annex. Later, a non-profit organization called The Vidiots Foundation was developed as a means of earning funding for their film classes once the video store was no longer a viable means of income. Herbert named several programs available for children and teachers wishing to incorporate cinema into their classrooms, allowing children to gain an appreciation for cinema before they even enter the university system. Scarecrow Video is a store that Herbert is involved with outside of this academic research, whose mandate aims toward “preservation, access, education, and community.”

During the question period, many in the audience shared their own experiences either working at or renting from video stores. To my surprise, he spun a positive take on Blockbuster’s contribution. Herbert ended with a final question to these video stores who have undertook the challenge of becoming educational centres/archives: “Have the video stores thought about what it means to archive?” This raised the issue of materiality and digital distribution/consumption. Once you have purchased a DVD it is yours to archive, but with digital formats the license can be revoked at any time. It seems, from the discussion, that while these stores have the ambition to preserve their films as a collection, the means to preserve the physical objects is not yet in place.

Almost everyday, I walk past the place that once held the Blockbuster where I worked. Even three years later, this commercial business space is still empty. At this moment, there are no more video rental stores in my borough, though it is home to Concordia’s Loyola campus. The lecture was a refreshing look back at how video stores impacted how we once watched and continue to think about movies. As our consumption habits continue to shift, there is no doubt that the categorizations of films employed by video stores will stay. Still, one can’t help but feel that something is missing within these digital fields of distribution, especially by those of us who were lucky enough to experience video store culture.

Daniel Herbert is an associate professor at the University of Michigan. His book on video stores, Videoland: Movie Culture and the American Video Store was published in 2014, and he continues to research this area.