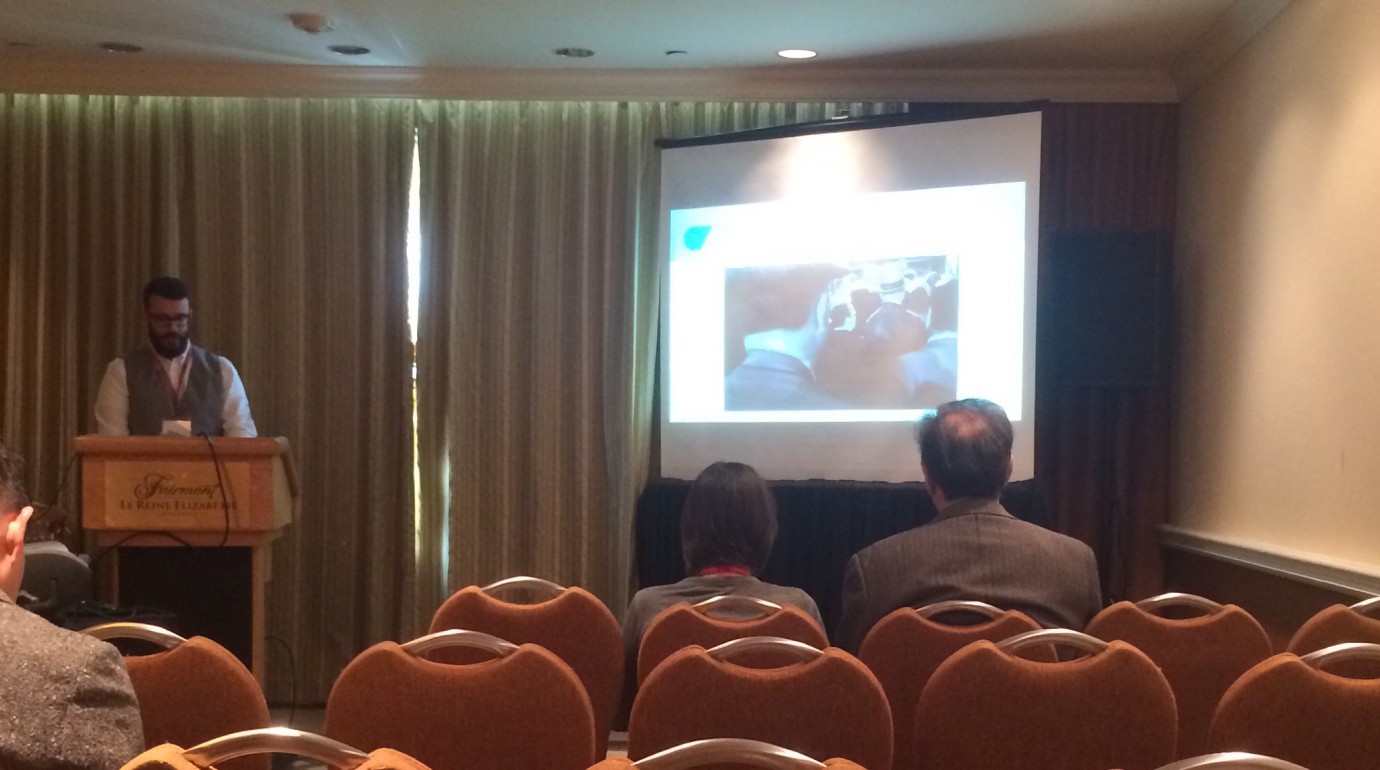 Philippe Bédard’s presentation at SCMS, “A Techno-Aesthetic Study of ‘Third-Person Fixed Perception Shots,’” will certainly remain a personal highlight of this year’s conference. It was an opportunity to hear a project that I have witnessed develop and transform throughout a number classes and workshops, now engaging in a wider context. Moreover, Philippe held his own – and then some – positioned between more experienced scholars and represented our cohort admirably.

The theme of the panel, “Bright, Shiny, New! Visual Style and Technological Change,” was embraced in a variety of ways. In the case of the third speaker, Sam Roggen, addressing the use of CinemaScope by genre filmmaker Anthony Mann, it was in a historicized fashion that perhaps didn’t fulfill the panel’s promise of technical insight. Conversely, the final speaker, Peter Collopy, who stated that he is a scientist hopeful to craft interdisciplinary relationships, spoke of the early hybrid analogue/digital Scanimate technology and its commercial applications. It was the first speaker, Michael LaRocco, to which Philippe’s research has the strongest kinship, as the guest from the University of South California addressed the digital and filmic connotations associated with variable frame rates. The question and answer period at the end of the panel addressed the relationship between the two scholars, particularly the perceptual nature of their respective research into frame rates and third-person images. It is in these moments that the panel arrived at its most productive and insightful conclusions.

What, then, is the research that Philippe Bédard shared with the larger Film Studies community? In both its introduction and conclusion, Philippe’s presentation advocated for the advantages of a techno-aesthetic methodology, one which attached a technical mode to the aesthetic result of an image and its impact on the spectator. The suggestion that the model for point of view – either third-person or first-person – be borrowed from video games proved to be a controversial decision in the question and answer period, and the associations could not be explained in depth within the duration of the panel. Some of the largest pleasures of this presentation, which I have been exposed to in different forms many times, include the use of a variety of constructive film clips (my favorite being Gaspar Noé’s Enter the Void [2009]), with a central shot from Darren Aronofsky’s Requiem for a Dream (2000) serving as the paper’s leitmotif. Additionally, a 2D bird’s-eye black-and-white set of moving images were created in order to illustrate the reality of a body moving within a space and alternatively, the perceptual impression of a fixed subject while the room moves around them.

It is clear that Philippe used the format and showcase of SCMS in order to best present his original findings to his advantage. I found it evident from the atmosphere of the room that the research was comparatively dense and impressive, even amongst peers such as those on the panel.