Don’t forget that Italian director Agostino Ferrente will be gracing us with his presence at Concordia this Saturday April 5 at 4:30pm. You should not miss the opportunity to see these films in the presence of the director.

Grad/Aperture will also be participating in an interview with Ferrente, which will be made available on the website soon thereafter.

As a refresher, Ferrente is in Montreal from April 4-8 and you can find some information about his visit to Concordia copied below. 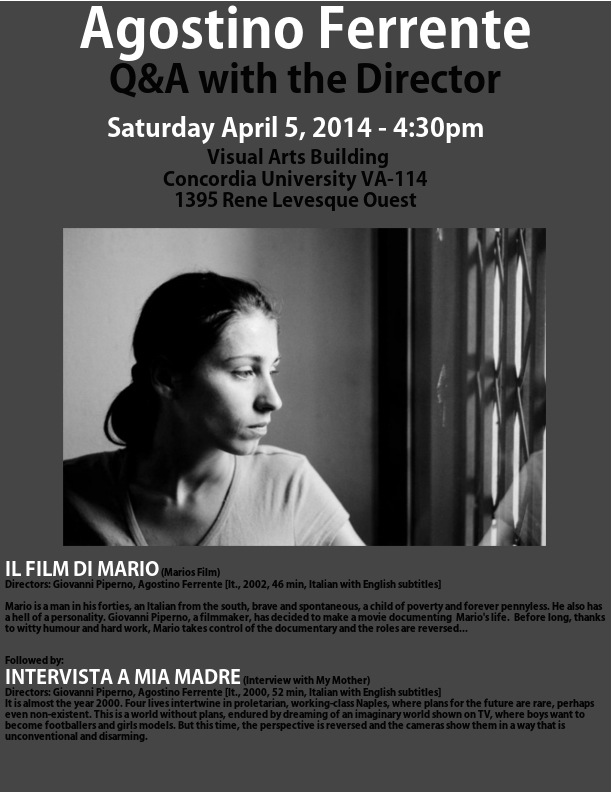 IL FILM DI MARIO (Torino Film Festival)
Director: Giovanni Piperno, Agostino Ferrente [It., 2002, 46 min, OVSTE]
Mario, an italian from the South in his forties, is spontaneous and brave, doomed to perpetual poverty. Giovanni Piperno, director, decides to dedicate a movie. Mario, his face scarred by life, performs odd jobs. Car thief and seller of lighters during the day, gigolo in the evening in the slums of Bari as a child was a “half-rogue,” said an elderly woman. Today preserves a crib in the street, where he has parked his old Fiat 126. Mario wants “to show that this is not his life.” Soon, Mario, will take the reins of the documentary thus reversing the roles…

Followed by:
INTERVISTA A MIA MADRE (Torino Film Festival)
Director: Giovanni Piperno, Agostino Ferrente [It., 2000, 52 min, OVSTE]
Summer 1999, almost two thousand … Four lives are intertwined in Naples of reconstruction, sub-proletarian and bourgeois, where the expectations for the future are scarce, if not non-existent. Adele, fourteen, was rejected four times in the sixth grade – every year about three thousand children in Naples drop out from compulsory school -. Silvana, fourteen years old, lives in Ponticelli with his father, who in the past has been in prison, but is now an honest bricklayer who is separated and is a mother to four children. Fabio, twelve years old, lives in the Rione Sanità, in front of the home of Toto, from whom he inherited a verve that perhaps will keep him away from the conditionings of the pack. A world without projects and living in an invented world, told from the television, where males want to be great soccer players, female models. But at least this time, the perspective is reversed, and the cameras they use them in an unconventional and disarming. Meanwhile, Enzo, thirteen, the right hand, accompanied by his father on the guitar, singing classic songs Neapolitan between the tables of restaurants frequented by tourists.