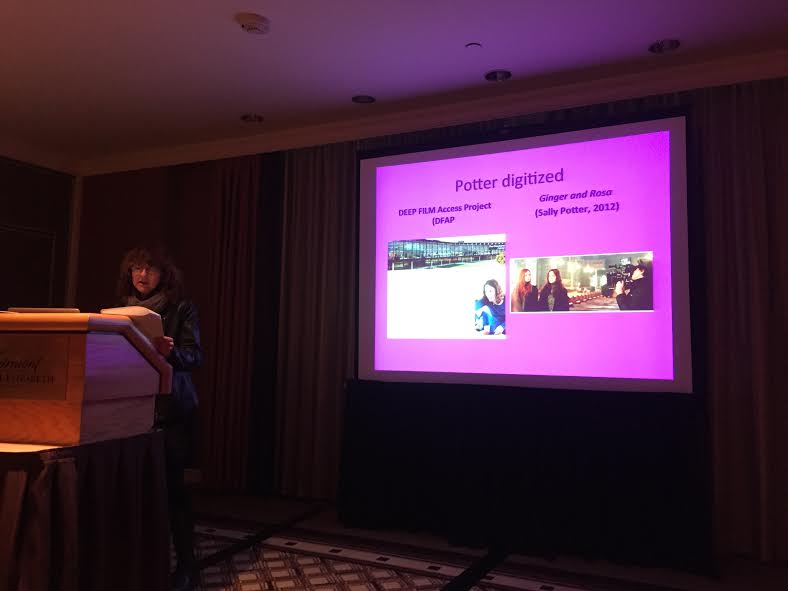 Concordia Professor Rosanna Maule presented yesterday on “Women’s Cinema on the Web: A New Platform for Feminist Discourse” in the panel “Theorizing Post-cinema: The Cinematic In and Out of the Theatre” where she proposed a step out of a solely theoretical approach and grasped more practical case studies. Rosanna’s presentation revolved around the importance of the Internet as a powerful tool and space operating in favor of women’s visibility within Film and Media realms.

In order to demonstrate her research, one of the case studies of Rosanna’s choice was the British filmmaker Sally Potter and her digital database called SP-ARK – “A unique educational resource designed to enhance your access to, and knowledge of, film and filmmaking, whatever your interests”. The website contains over four thousand items and it comprises a large range of works from 60s and 70s feminists historical discussions to experimental body performance and gender formation. The scholar defended a point that Potter’s film and media collection plays an important role creating a channel of dissemination in global media culture that facilitates the circulation of women’s issues.

Secondly, along similar lines, Rosanna presented the online-based study case of DFAP (Deep Film Access Project) and the German filmmaker Ulrike Ottinger digital strategies to promote and distribute her feminist works on a global scale. The scholar explained that both cases exemplify proactive practices towards women’s visibility and “it inaugurates a new era for women, where the past can be preserved and the present can be accessed.”

As a last case study, she looks at the practice of blogging uniting academic and non-academic communities producing collaborative textual context. She brings in the website Women’s Film History Project UK/Ireland Network and Anne Friedberg’s feminist texts published online as examples of her thesis of digital realms generating visibility for women and creating a profound debate about gender.

Rosanna conclude her insightful contribution to the panel, by bringing together her case studies as examples of the how the Internet has raised, empowered and facilitated both women’s filmmaking and feminist debate in the globalized world. She finalizes her argument by raising an important issue that we needs to be considered, in order to enhance film and media feminist digital practices: the need for efforts in technical resources and funding.