When a snowstorm shut down all the airports in Chicago the day before the 2013 Society for Cinema and Media Studies conference was to start, we all panicked. Out of the nine grad students in the MHSoC contingent going to SCMS, only Kristen had attended before, and three of us – Kester, Rachel, and I – were scheduled to present on the first day. An over-night layover in Toronto and yet another delayed flight later, we arrived in Chicago just in time for the conference to start (notably, Kester got to present his paper despite being the first to present on the first panel of the first day). Late, tired, overstressed and overwhelmed, we’d made it to the largest international conference in our field.

From scantly attended panels for those of us on the first day to a surprisingly well attended Sunday morning workshop organized by Kristen, responses to our papers varied somewhat (in case you’ve forgotten what they were, reread them here). Overall, the ‘rule of the middle’ applied, as the panels closer to the middle of the conference had a bigger audience. As Rachel found out, submitting through an open call can have its drawbacks, particularly when papers are grouped together under a loose topic that doesn’t fully represent the subjects of each individual paper, and the audience is therefore versed/interested in only one of them. Luckily, this wasn’t always the case, and some of us found that at times the best feedback and interest in our work came from our fellow panelists and chairs.

Zach and Brandon participated in a pre-formed panel organized by Brandon (check out the live-tweets from their panel here), and their experience speaks to the advantages of following this path. Both admitted afterwards that the response to their papers – and the panel – was overwhelmingly positive, and it was fulfilling to find others interested in their topics. As an organizer, Brandon highly recommends that people form their own panels since the experience of putting it together months in advance, to stressing out about panelists you’ve never met, to seeing the final product come together is overwhelming but even more rewarding. In his words, “it makes you feel like a proud new parent, except without the lifetime responsibility!”

Discovering what other people are working on – particularly other graduate students – was just as exciting. As many of us commented, attending all sorts of panels allowed us to gage the breadth of the loosely-defined field of “cinema and media studies”. Brandon and I attended a panel on porn pre-history, where a paper by Peter Alilunas, a graduate student at the University of Michigan, documented how closed circuit video was being used to stream pornography directly into hotel rooms starting in 1970. As Brandon pointed out, this upends the traditional timeline currently established within porn viewing history, which posits the ‘Golden Age’ beginning in 1972 with the theatrical release of Deep Throat and ending with the advent of VHS in the late 1970s. Throughout the conferece, most people tended to read their papers, and, against conventional wisdom, Dru found that this method is sometimes the best. His favorite paper was by Prof. Rob King of Columbia University, who presented on Louie and the dialectic between the abject and the absurd in contemporary comedy. He gave a master class in conference presenting, as Dru puts it, because “he kept to time; he read his paper in an engaging and lively way; and he integrated his clips into his slides so that they flowed seamlessly with his talk”.

It wasn’t all great talks and valuable lessons though. Notably, a few of us remarked that certain panels, in attempt to sketch out the confines of their medium of study, neglected to address that medium’s paratexts, usually to the detriment of their arguments. As well, discussions around issues of representation fell prey to the dichotomy of positive vs. negative representations, and were generally biased towards fictional representations, even as nonfiction has become ever more prevalent (and rich for study) in film, TV, and online media. As Zach pointed out, attending SCMS grants you a new perspective on the field, “how it is complex, at times contradictory, at times incoherent with itself, fresh and old at the same time”. For those of you following from back here in Montreal, you may have had a chance to see the various live-streamed panels, or follow the official Twitter account for Cinema Journal. These were great attempts at making the conference more accessible to everyone, but as many have already pointed out, the selection of panels that were live-tweeted and live-streamed made SCMS seem like an Internet and TV studies conference. There is hope, however, as one of the CJ reporters has noted, that in years to come the various SIGs and Caucuses will have their own dedicated teams of Twitter reporters. 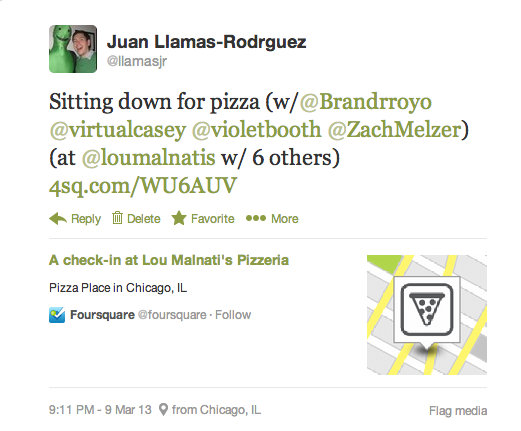 Finally, what’s a good conference without socializing and partying? Whether it was an expedition to Chicago’s vegan cuisine, a special screening with Nick Offerman, a show with a RuPaul’s Drag Race contestant, or a traditional Chicago deep dish pizza dinner, every night was ended with some form of entertainment and a chance to unwind from the daily conference activities. All of us noted that we would like to keep coming back every year to take advantage of the networking possibilities and to put faces to names (and let people put a face to your own name). To be honest, after SCMS you end up being exhausted for days, and it takes a while to get back to your daily routine – but it’s definitely worth it. Here’s hoping for an even greater MHSoC contingent next year, and for many years to come!