For a fourth consecutive year, the Concordia Graduate Film Studies Student Association showcased a variety of student research topics at various stages of development during our annual MA Symposium. The DHC/ART Foundation in the Old Port graciously provided an excellent space for this year’s symposium, which sought to give valuable presentation experience and feedback to presenters from their colleagues in attendance.

The room was packed as everyone shared in an excited curiosity as to what their peers’ research interests are and how some projects have evolved from their earliest manifestations. Grad/Aperture was there to cover it all, live-Tweeting and posting pictures on Instagram using the hashtag #cgfssa. Click the links to check out our live coverage! PHOTO GALLERY COMING SOON! 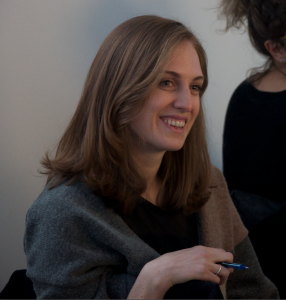 Julia Huggins was our first presenter, setting the bar high for all those that followed with a presentation titled “Analog Amnesia: Memory, Mastery, and Materiality in Eternal Sunshine of the Spotless Mind and 50 First Dates”. Developing from an early interest in contemporary romance films, Julia hopes to write a thesis concerning the status of memory in films of “the digital age”, or more specifically how memory is externalized via material objects. Still in its early stages, Julia demonstrated how Michel Gondry’s Eternal Sunshine and Peter Segal’s 50 First Dates present memory as an entity to be mastered through materialization. Although there is plenty of research to be done, Julia is well on her way to finalizing her thesis proposal that will surely result in a strong and complex piece of film scholarship. 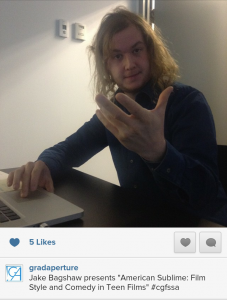 Jake Bagshaw presented “American Sublime: Film Style and Comedy in Teen Films, 1995-2004”, a survey of narrative and stylistic tropes within American teen comedies from this period. Jake suggests that this period presents a heavy concentration on the manifestations of memory and fantasy through several devices including the establishing of cliques in opening montages, fantastical recollections of past events, and the importance of social gatherings that delineate social structures while symbolizing the struggle to stand out from the rest. The question period that followed Jake’s presentation was lively, as many shared their personal favorite films and sequences from this era. Ultimately, it was concluded that these films were replaced by literary based concepts such as the Twilight and Hunger Games series of books. Consensus: fetch still needs to happen. 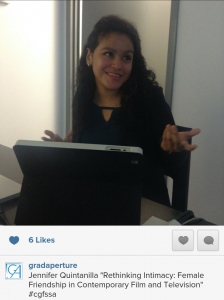 Jennifer Quintanilla presented a very interesting look into the representation of female relationships titled “Rethinking Intimacy: Female Friendship in Contemporary Film and Television”. From the physiologically destructive “frenemy” kinship in Black Swan; the intimate, realist dynamic in Francis Ha, and the unapologetic, grotesque representation in the popular Broad City, all three present varying ideals of female friendship. Jennifer plans on approaching these objects from a gendered feminist point of view, challenging traditional concepts of friendship while attempting to avoid a binary between male and female through an all-encompassing definition of the term friendship. This is no easy feat—many of our presenters face the similar challenge in defining geographical, historical and theoretical approaches to a thesis proposal, as well as justifying our objects of study, especially on a subject that has a large spectrum. Nevertheless, all in attendance were enthusiastic about Jennifer’s potential project, and offered tons of useful advice and examples—the kind of discourse that this symposium was meant to create. 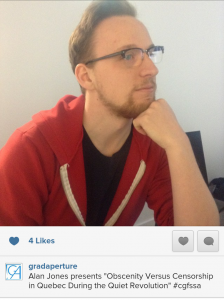 The final first year MA presenter was Alan Jones, presenting on a topic that came about from his RAship with Prof. Thomas Waugh titled “Obscenity Versus Censorship in Quebec During the Quiet Revolution”. Alan looked at the commercial releases and ensuing obscenity trials of Pile ou face and Après-ski, two Québécois ‘films de fesses” that faced potential censorship during the Quiet Revolution. While combatants held fast in their conviction to censor or remove these films from theatres, those who championed the films fought for their artistic rights and their symbolic representations of the prostitution of Quebec and its people. Today, censorship debates continue in the media as what is considered obscene is continually redefined and challenged. 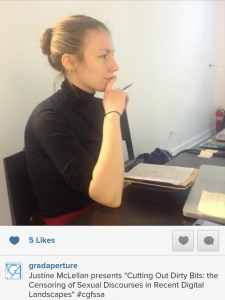 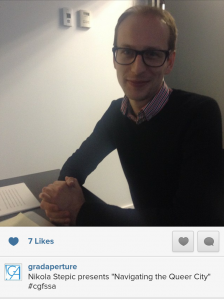 CGFSSA President Nikola Stepic presented “Navigating the Queer City”, an essay written for Prof. Catherine Russel’s City Films class last semester. In this paper, Nikola problematized the relationship between film and the queer subject by arguing possible new methodologies in approaching the queer, the uncanny, and the alternative within theories of the city. Using William Friedkin’s Cruising as a case study, Nikola demonstrated that Al Pacino’s character acts as the flaneur, an insider character that penetrates the city’s alternative and hidden cityscapes. Cruising denotes the prowling of the city streets in search of anonymous sex, acting as a kind of erotic topography. This approach provides a new perspective to queer film canon, as the urban elements typically associated within this canon intersect with a navigational guide to the city through the encounter; another quality presentation delivered by Stepic, naturally. 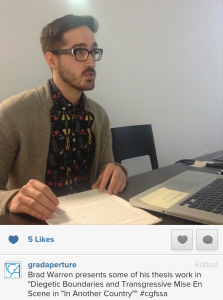 Brad Warren presented “Diegetic Boundaries and Transgressive Mise En Scene in In Another Country”, which was adapted from his thesis project examining the consequences of the peculiar narrative strategies employed in the work of South Korean filmmaker Hong Sang-soo. Brad examined the arrangement of Sang-soo’s In Another Country and how the film illustrates the diegetic and fictional boundaries exemplary of a “multiple-draft” narrative structure. Despite nominal and physical similarities, all characters in this film exist in their own diegesis in somewhat parallel worlds. Time lends agency to the spectator, as we cannot escape its fallacy and various degrees of representation. Ultimately, In Another Country denotes the discovery of truth-value in diegetic hierarchies, as impossible actions imply transgression within these worlds that personify an ongoing process of identification. Brad is well on his way to completing his thesis (one day), and we all look forward to reading it! 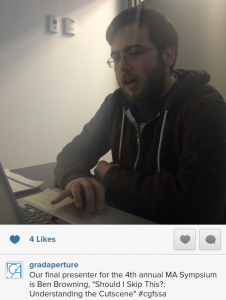 Last but not least, Ben Browning presented “Should I skip This? Understanding the Cutscene”. Using the Resident Evil and Metal Gear Solid franchises as primary case studies, he mapped out how cutscenes as a narrative device have changed throughout the past two decades. Ben suggests that player agency has challenged the very definition of a cutscene, which is typically characterized as a more passive device that simply connects pieces of gameplay. Quick time events require player action, undermining the traditional mini-film approach to cutscenes. Moreover, contemporary video games contain rapid, sometimes unnoticeable changes in agency, giving the player a more immersive experience and further blurring the lines of passivity and agency. This was another fascinating topic that even those without gaming experience could appreciate, especially with concerns to all of the cinematic elements that appear in video games. An exciting and accessible topic that will surely grab the attention of scholars and noobs alike!

While the event may have run a little long, the feedback that these presenters received will surely be valuable as they continue to refine and research their topics and approaches to their objects of study. Thanks again to the DHC/ART Foundation for providing space and tech support, and for the CGFSSA for putting on another exciting, informative and fun event. Until next year!