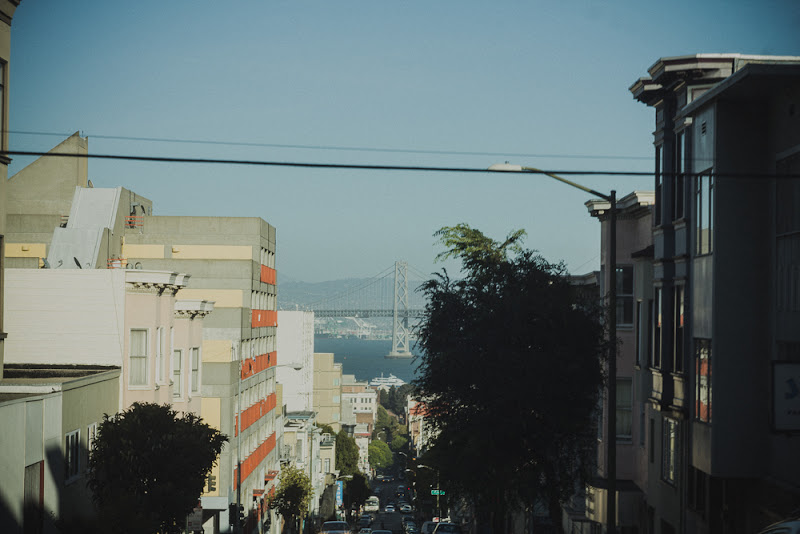 Last week (October 17-19), current MAs Rachel Jekanowski, Georgia Cowan, and Viviane Saglier, along with former MA Eric Whedbee, represented Concordia University at the 14th Annual SFSU Film Conference on “Cinema in Crisis” (check out here what their papers were about in case you’ve forgotten). During the course of three days, they had the chance to meet other MA and PhD students from local and international universities, and heard them present papers on national cinemas, film festivals, gender and sexuality, literature and television, technology, and Hitchcock. Our delegates found the majority of these papers to be well-presented and interesting, but even more exciting was connecting with fellow students at the receptions following each day’s panels – talking about programs, holiday plans, common interests, and what to do in the city.

The city! Georgia noted that San Francisco came up regularly in the conference discussions, and the city was as much a highlight as was the work. The organizers suggested taking the Alfred Hitchcock tour, visiting the Golden Gate Bridge, and offered the best places to grab food and drinks. From all the delightful Mexican burrito joints and cafes across the city that they checked out, The Little Chihuahua was Rachel’s favorite – and the garlic shrimp burrito (sauteed shrimp, avocado, rice, black beans, smoky chile tomato salsa, cilantro & onion, pico de gallo) was the food highlight of the trip.

The timing of the conference also coincided with the Arab Film Festival in San Francisco. Viviane, along with a fellow presenter whose work was on Egyptian cinema, checked out a few screenings, and even found that the films mentioned in her talk were being shown as part of the festival! The MHSoC contingent also hopped into a car and visited the UC Berkeley campus, where they went to the Berkeley Art Museum and Pacific Film Archive, and heard great stories about the times when Sartre and Truffaut used to visit.

Our students were commended by the organizers on how strong their presentations were, and some presenters even approached them to ask about our program! The conference was great overall given the presenters’ genuine interest in each other’s work and in keeping the dialogue going even after the panels were done. Ultimately, everyone agreed to having an amazing time, even if all those visits to the City Lights bookstore meant way too many books had to be carried back…