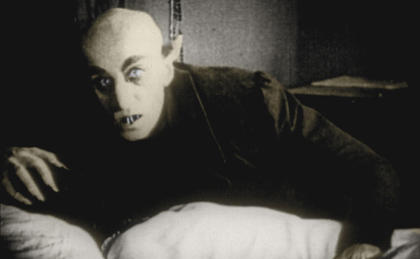 The following is a summary of her illustrated lecture: “One of the most pervasive figures to haunt Gothic cinema is the vampire, appearing (and disappearing) on cinema screens in Méliès’ The Haunted Castle (1896), one year before the publication of Bram Stoker’s Dracula. Through a selection of film images from Nosferatu to Byzantium, Stacey Abbott will examine this uncanny synergy between monster and medium, defined by a shared liminality, co-existing on the boundaries between the physical and spectral, living and dead.”

One of our most successful Specialization in Film Studies graduates in the days before we initiated our M.A. programme, Stacey Abbott (BFA 1991), will be giving a presentation based on her lecture at the British Film Institute’s National Film Theatre last year, “Kingdom of Shadows: The Birth of the Cinematic Vampire”:

Dr Abbott’s presentation will be given in the De Sève Cinema (LB-125) at 6:00pm on Monday, March 17. She is a Professor—Reader in Film and Television Studies—at the University of Roehampton, England. She is the Series editor for the “Investigating Cult TV” book series at I.B. Tauris and is the Vice-President of the Whedon Studies Association. She received her M.A. in Film Studies and Film Archiving from the University of East Anglia, and her PhD from Birkbeck College, University of London. She is a seminal scholar of contemporary vampire films, and her publications include three authored books, Celluloid Vampires (2007), ”Angel”: TV Milestone (2009), and TV Horror: Investigating the Dark Side of the Small Screen (2013), cowritten with Lorna Jowett.

All are invited to celebrate Stacey’s return. Her presentation will precede Donato Totaro’s regular class, and at its conclusion (at 7:15pm, approximately), there will be a break in the proceedings so that all non-members of the FMST 200 course may leave the room.’