The Concordia Graduate Film Studies Student Association is thrilled to announce the Fourth Annual CGFSSA Symposium that will be taking place on Friday, March 6th, 2015.

The day will begin with breakfast and coffee, followed by presentations by Master’s students. First-year students will kick off the proceedings, with Julia Higgins talking about the status of memory in the digital age, Jake Bagshaw performing an intervention in teen films of late 1990s and early 2000s, Jennifer Quintanilla’s exploration of female relationships as a plot device and narrative texture, and two papers on censorship: Alan Jones’ research of the Quebec obscenity trials during the Quiet Revolution and Justine McLellan’s (Université de Montréal) examination of censorship in Britain’s VOD pornography.

The presentations will continue with second-year MA students talking about their thesis-related research. Brad Warren will share his work on diegesis and mise-en-scène in director Hong Sang-soo’s film In Another Country. Ben Browning will examine the nature of cutscenes in video games, and its precarious status in relation to the player’s agency. Finally, Nikola Stepić will share his research on the intersection between queer and city films, and the possibilities that emerge from a cross-fertilization of these two frameworks.

The symposium will take place in a space graciously provided by the DHC/ART Foundation, 465 Rue St. Jean, beginning at 10 AM. We hope to see many of you there! 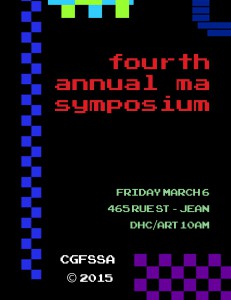