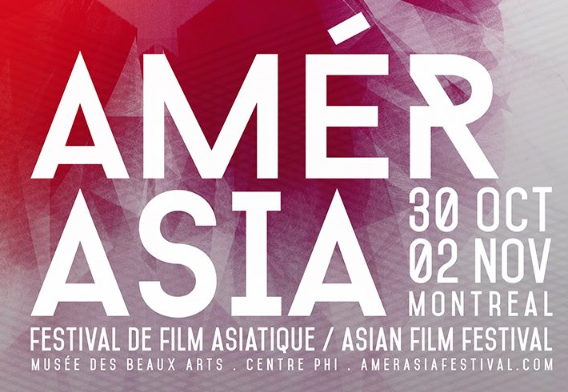 The AmérAsia film festival will take place between Thursday, October 30 and Sunday, November 2, 2014 at the Montreal Museum of Fine Arts and the Phi Centre, with features and short films from the Philippines, Cambodia, India, South Korea, Japan, Taiwan, Argentina, Quebec and Canada, as well as masterclass and workshops. For its 4th edition, the festival will go further in exploring alternative and avant-garde Asian content in media and multimedia arts.

This year’s programming puts particular emphasis on Philippines cinema, with films from Khavn De La Cruz and esteemed director Kidlat Tahimik, who has been called the “father of Philippine New Wave.” The director Kidlat Tahimik is currently on a world tour for his retrospectives in Amsterdam, Germany, workshop in Vietnam, and to be a juror in Copenhagen.  It is a true  honour to welcome him to Montreal this year. Tahimik will show and discuss Turumba (1981) and Perfumed Nightmares (1977) and present a master class with a special focus on his continuing project Memories of Overdevelopment (2014).

AmérAsia will be presenting local talents and film works such as Après la peine (A New Mourning) (Anh Minh Truong, 2012) with the director’s attendance and docu-animation There Is A Garden (2014) followed by an artist talk on “The Artist and the Artist’s Responsibility,” which take part of the Québecois programs. Montreal filmmaker Mi-jeong Lee will present her multimedia project, More Than Here: Midnight to 4 A.M in the program of The Practitioner’s Lab which offers an exhibition space to artists who work on research/creation in media and multidisciplinary arts in relation with any aspect of Asian content.

All events on our opening day, Thursday, October 30, will be presented free of charge. These include Philippine New Wave film screenings, the One Piece Film challenge, and the Camera Aesthetic Workshop.

The One Piece Film project invites established and emerging artists to write, shoot and edit a video, up to 5 minutes long, on a theme that will be announced on Friday, October 24, and to finish it within the following 72 hours. (https://www.indiegogo.com/projects/one-piece-film-challenge) Participants may use use a camera, smartphone, iPad or tablet. (The name One Piece Film is borrowed from a popular Japanese manga series.) The Camera Aesthetic Workshop will examine the long-take, as used by Taiwanese filmmakers Hou Hsiao-hsien, Tsai Ming-liang and Edward Yang. It will be given by Peter Rist (film studies professor at Concordia University) and Erik Bordeleau (post doctorate student in philosophy and a scholar at Concordia’s SenseLab).

AmérAsia recognizes the strong relation between literature and the image. We have selected five books connected with our scheduled films. A limited number of autographed copies will be available for purchase during the festival.

The selected books are:

This Is Not A Film: Philippines New Wave by Khavn de la Cruz – his documentary of the same title will be shown at the Phi Centre (see the screening schedule).
Bombay Wail and Other Stories written by Veena Gokhale –  The plot of the Indian film The Lunch Boxcomes from this collection.
Experimental Ethnography written by Catherine Russell  in relation to Kidlat Tahimik’s masterclass
Cockroach written by Rawi Hage–  in connection with the short film The Underground
Always More Than One: Individuation’s Dance written by Erin Manning  – In relation to a video installation for Practitioners’ Lab project: More Than Here.

The core strength of our festival comes from the participation of members of Montreal’s artistic communities and our valued volunteers in collaboration with Concordia University’s SenseLab, the Moving Image Research Laboratory and Cinema Out of the Box at McGill University, COCO Centre for Community Organizations, the Montreal Museum of Fine Arts and Phi Centre. The City of Montreal and the Canadian Council of the Arts have contributed financial support.

Admission is free for all screenings and events at Montreal Museum of Fine Arts on October 30.

www.amerasiafestival.com, ou sur le site LaVitrine.
Under the direction of Ciné-Asie, founded by Mi-jeong Lee in 1997, the AmérAsia festival introduces Asian, Asian-Québecois, and Canadian cinema to the Montreal community, as an invitation to reflect on Canada’s cultural identity and its relationship with Asia.  The AmérAsia festival has a mandate to rally the various Asian communities in Montreal and to promote the relationship between Asia and Québec. By presenting films by Asian-Canadian filmmakers, AmérAsia hopes to encourage communication between Montrealers and their neighbours.

Upon request, we will provide you the list of screeners.