Congrats are in order for PhD candidate Meredith Slifkin and MA Colin Arason for their work being published in the latest issue of CineAction, issue 94! 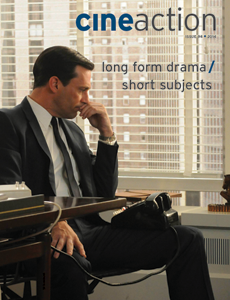 Melodrama, The Americans, and the Global Television Imaginary – by Meredith Slifkin

“This paper aims to use melodrama as a method for exploring the global and local functions of the mode, and the potentials for cross-cultural experience that lie therein. I use the medium of television and a case study of The Americans (TV Series, FX) as an exercise in thinking about the way that melodrama mediates borders and (trans)national identities, by analogizing the global and the local to the public and the private (as they function in melodrama) respectively.”

“Expanded from an essay written for an experimental film class taught by the late Louis Goyette, this article takes the concept of vertical montage and explores that particular way that Nagler employs this technique. Building off the persistent theme of remembrance that populates perhaps/We (2003), “Reading the Ruins” explores the idea that Nagler, rather than constructing his film in the editing stage, is more accurately engaged in a sort of cultural archaeology that seeks to excavate and preserve memories.”

Look for the latest issue of CineAction on new-stands NOW!

Have you been recently published? Let us know and we’ll post about it: gradaperture[at]gmail.com