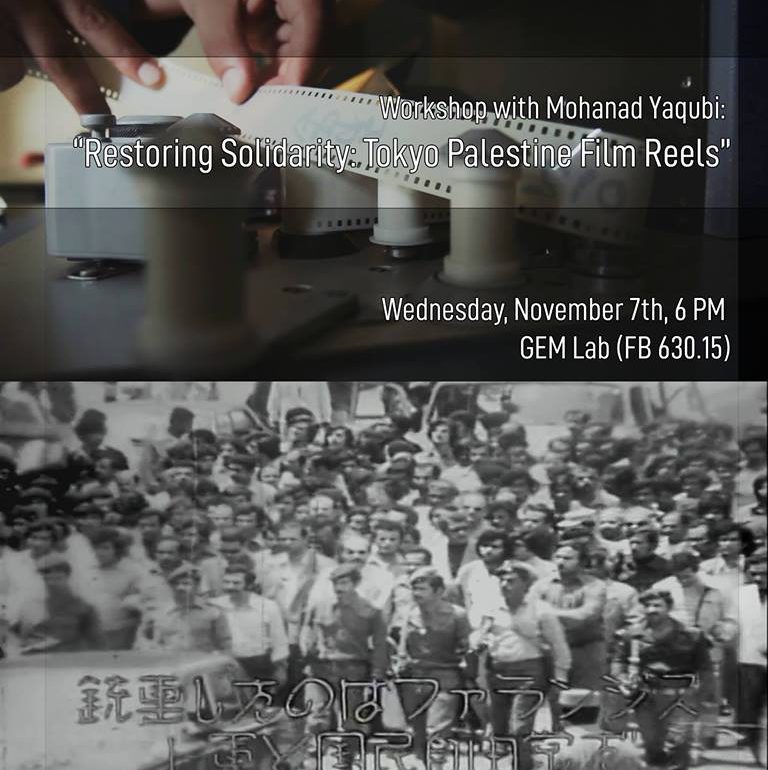 Please send an email to giuseppe.fidotta@gmail.com  to register. This event is a part of “Political Imaginaries of Media,” a year-long series of events and screenings dedicated to the political potentials of contemporary alternative media cultures, supported by the Global Emergent Media Lab, Feminist Media Studio, Concordia Documentary Center, and The Royal Academy of Fine Arts (KASK), Gent and in collaboration with Subversive Films. “Restoring Solidarity” is the first workshop of The Archives of Anticolonialism project. For more on the project, click here.

About the artist: Mohanad Yaqubi is a filmmaker, producer, and one of the founders of the Ramallah-based production house, Idioms Film. Yaqubi is also one of the founders of the research and curatorial collective Subversive Films that focuses on militant film practices, and most recently, a resident researcher at The Royal Academy of Fine Arts (KASK) in Gent, Belgium. Yaqubi’s first feature film Off Frame AKA Revolution Until Victory, 2016 made its premiers at TIFF, Berlinale, cinema du reel, Dubai IFF, and Yamagata among 50 other premiers and screenings around the globe.

This workshop is part of a research project around a collection of films from and on the Palestinian struggle made throughout the 1960s and 1970s. During his visit to Japan, Mohanad Yaqubi came across “The Tokyo Palestine Film Reels,” a collection of films that address the question of Palestine. The initial films in the collection have been selected and sent to Japan by Masao Adachi and Koji Wakamatsu, during their time with the Red Japanese Army’s participation in the Palestinian Revolution in the 1970s. Their intention was to screen these films at political and solidarity events, contributing in this way to the ongoing dialogue between Palestinian and Japanese people, masterfully illustrated by Adachi and Wakamatsu’s “PFLP/RJA: World War Declaration.” As the number of films grew to 26, the collection moved from the PLO representation office in Tokyo to the family house of Prof. Tanami-San around the end of the 1980s.

The collection contains a wide range of films made by British, Italian, German, Palestinian, Egyptian, Iraqi, and Japanese filmmakers, simultaneously signalling the internationalist tendency of militant filmmaking, while reflecting the utopia of a transnational, if not global, revolution. As the struggle of the Palestinian people against the occupation continues to the present day, the process of restoring these films becomes a political act. At stake in this endeavour is the necessity to re-present the revolutionary context and reclaim its relevance for the ongoing Palestinian resistance by indicating new political horizons. Apart from the presence of many films considered either lost or unknown, the collection itself is a witness of a network of solidarity. In this respect, the restoration project will not only bring it to life again but will also explore its significance for today’s post-colonial condition.

As a first step of this project, Mohanad chose three films from the collection and had them sent to the GEM Lab to be examined and scanned. The “Restoring Solidarity” workshop will start with a reflection on the restoration process, asking what can be the first-hand experience working with such materials in order to make them operative. In this sense, it inaugurates a set of inquiries about the revitalization of this archive, foregrounding that the memories contained within these films are as important as the collection itself.