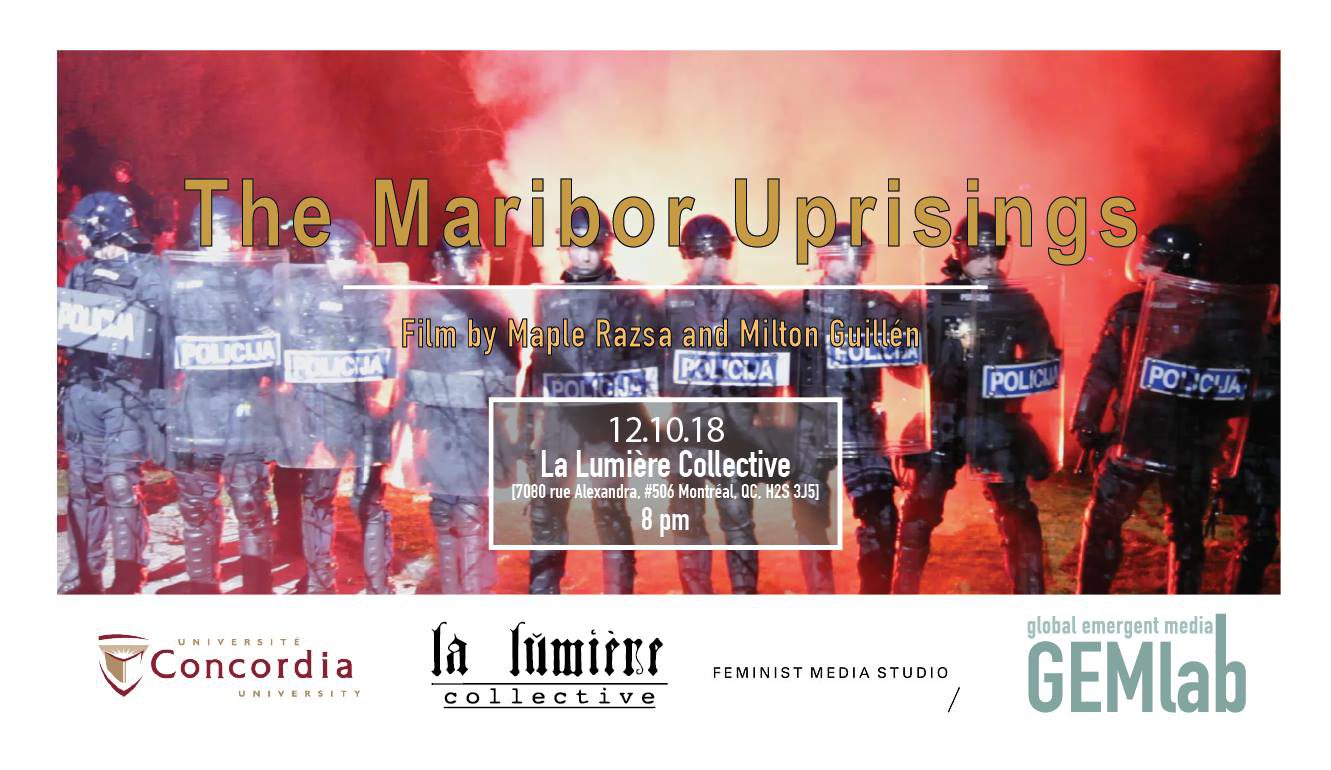 This is a free event.

Maribor Uprisings (2017) is an interactive film by Maple Razsa & Milton Guillén, and is presented in collaboration with la lumière collective. Politics of Alternative Media is a year-long project conceived as a series of workshops, screenings, and lectures organized by a collective of researchers, artists, and curators gathered around la lumière collective, Concordia University’s Global Emergent Media Lab, and Feminist Media Studio. It aims to foster the exchange of ideas about grassroots, non-commercial and emancipatory practices using media as instruments of mobilization, empowerment, and community building. As an effort to counter the intensified reconfigurations of media landscape according to neoliberal logics, the project advocates forms of media cultures accessible to everyone and simultaneously invests in reimagining alternative media formations. PAM is curated by Giuseppe Fidotta, Sima Kokotovic, and Sanaz Sohrabi.

About the event: In the once prosperous industrial city of Maribor, anger over political corruption became unruly revolt. This participatory documentary places audiences in the midst of the third and largest uprising as crowds surround and ransack City Hall under a hailstorm of tear gas canisters. Soon the mayor will resign—and the movement will spread to cities across the country. The Maribor Uprisings takes up urgent questions raised by these events, and by uprisings elsewhere, from the Arab Spring, through Paris, to Black Lives Matter. What sparks such popular outrage? How are participants swept up in—and then changed by—confrontations with police? Could something like this happen in your city?

The directors invite audiences to engage these questions through an unusual and participatory form. Drawing on the dramatic frontline footage of a video activist collective embedded within the uprisings, this film places viewers amidst the jostling crowds. It requires them to make their own choices about which cameras they will follow and therefore how they will participate. Like those who joined the actual uprisings, audiences in the theater must decide whether to listen to organizers and remain with those committed to nonviolent protest on Freedom Square or to follow rowdy crowds toward City Hall and almost certain conflict.

This live participatory documentary invites audiences to grapple with the intimate as well as the public meanings of protest through reflection on the choices of actual participants in the uprising—as well as the choices they themselves make during the screening. How are citizens’ senses of themselves changed by experiences of state force: tear gas, stun grenades, armored vehicles, water cannons, and helicopters? Is this what one protester described as “feeling the state on your own skin?” In these violent encounters, why do so many protesters feel “love at the barricades?” What are the perils—and the possibilities—of these increasingly common eruptions in urban life?

About the Alternative Media Cultures Project: The Alternative Media Cultures project explores how grassroots, activist, and non-commercial media-makers deal with the practical concerns they encounter in their projects. As such, it showcases the work of a variety of cultural producers with a specific focus on the operations necessary to build an alternative media infrastructure. It also promotes a hopefully fruitful exchange between actors, audiences, and institutions on the practical quandaries related to the production, circulation, and sustainability of these models. The project is a platform for developing research modules and analytical tools for understanding the contemporary entanglements of media and activism, while at the same time creating a leeway to foster bonds of solidarity amongst cultural workers engaged in the pursuit of alternative media cultures.