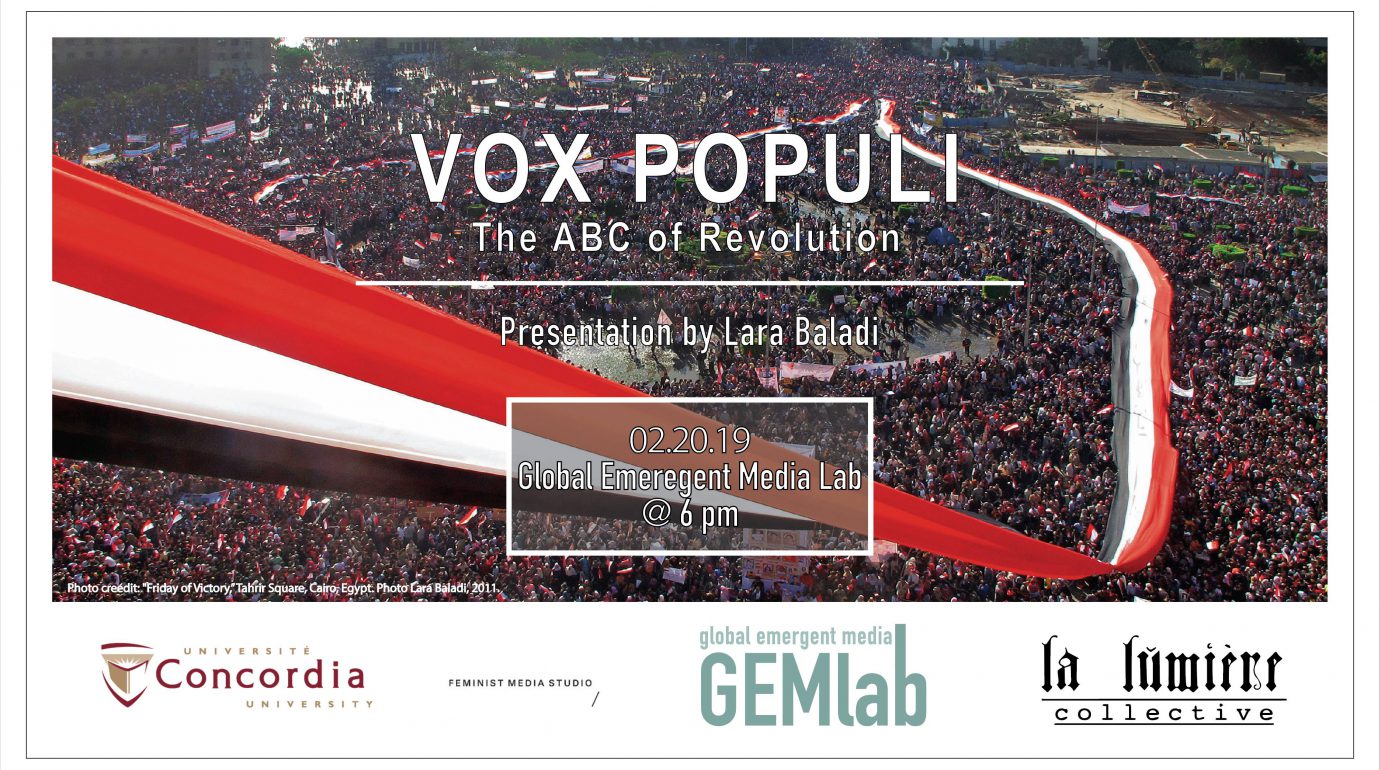 Vox Populi is an ongoing project by Lara Baladi, including a series of media initiatives, artworks, publications, an open source timeline and portal into web based archives of the 2011 Egyptian revolution and its aftermath and other global social movements. It is positioned at the intersection of digital archives, innovative forms of story telling and contemporary art.

This series is part of Politics of Alternative Media, a year-long project conceived as a series of workshops, screenings, and lectures organized by a collective of researchers, artists, and curators gathered around la lumière collective, Concordia University’s Global Emergent Media Lab, and Feminist Media Studio. It aims to foster the exchange of ideas about grassroots, non-commercial and emancipatory practices using media as instruments of mobilization, empowerment, and community building. As an effort to counter the intensified reconfigurations of media landscape according to neoliberal logics, the project advocates forms of media cultures accessible to everyone and simultaneously invests in reimagining alternative media formations. PAM is curated by Giuseppe Fidotta, Sima Kokotovic, and Sanaz Sohrabi.

About the artist: Egyptian-Lebanese multidisciplinary artist, Lara Baladi, lives in Egypt since 1997. She is currently based between Cairo and Cambridge, Massachusetts. Baladi has worked in advertising, film production, radio broadcasting, photo journalism and set photography and curated exhibitions. Her work, published and exhibited worldwide, encompasses analogue and digital collage, video, multimedia, architecture, installations, sculpture and perfume. In 2006, Baladi founded the artist residency Fenenin el Rehal (Arabic, Nomadic Artists) in Egypt’s White Desert. She won the first prize (Grand Nile Award) at the Cairo Biennale 2008-09. During the 2011 Egyptian uprisings, she co-founded two media initiatives, Radio Tahrir and Tahrir Cinema. Baladi ‘s ongoing project since 2011, Vox Populi, includes a series of media initiatives, artworks, essays, publications and an open source archive on the 2011 Arab uprisings and other, past and present, global social movements. Among other international art residencies, in 2014, Baladi was a Fellow of MIT’s Open Documentary Lab and in 2015, the Ida Ely Rubin Artist in Residence at MIT’s Centre for Art, Science and Technology (CAST). Since 2015, she has been a Lecturer in MIT’s Program in Art, Culture and Technology (ACT).