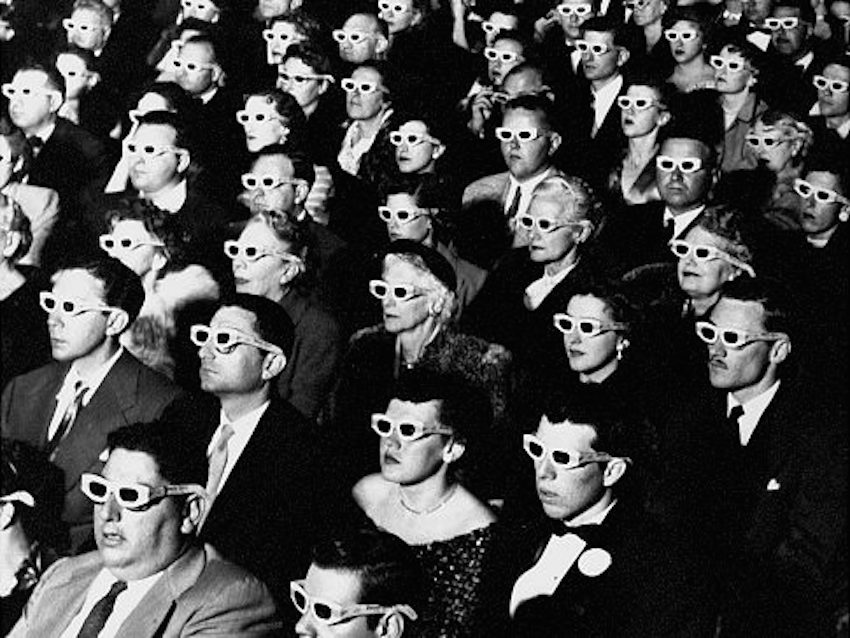 Many things have changed in the four years that Grad/Aperture has covered the annual Concordia Graduate Film Studies Student Association’s MA symposium, including venues, formats, and the time of year in which it is held. Despite these changes, the CGFSSA continues to provide a safe space to showcase the diverse interests of Graduate students and their work, from early ideas to near completed projects.

For a fifth consecutive year, students had their fill of carbs, coffee, and an ever-diversified group of presentations:

Second year MA Jake Bagshaw opened the symposium with a presentation based on a paper he recently delivered at a conference in New York, “Comedy Central? Displaced Authorship, Postfeminism, and Online Reception”. Building from his interest in reception studies, Jake problematized how the reflexivity of humour and circularity of reception of popular Comedy Central programs potentially limits its audience to a denomination that does not necessarily reflect the feminist ideologies of their content, particularly in shows such as Broad City and Inside Amy Schumer. Created and spearheaded by women who have also placed themselves in staring roles, these programs feature content from the perspective of the contemporary woman and have gained significant internet exposure. In spite of their satirical approaches to the politics of representation on television and growing popularity, Jake suggests that their polemic reviews and reflexive humour ensures that diverse audiences remain peripheral to Comedy Central’s core viewership of tech savvy male audiences. The ensuing discussion touched upon a wealth of postfeminist discourses including the gender divide in comedy and the effectiveness of distribution systems in relaying these ideologies.

Drafting the second chapter of her thesis, Julia Huggins returned to the symposium to present an analysis titled “Analog Amnesia in the Digital Age: The Technology of Memory in 50 First Dates”. Last year, Julia was in the later stages of outlining her thesis proposal, hoping to investigate the convergence of intimacy, memory and materialization. Films such as 50 First Dates and Eternal Sunshine of the Spotless Mind present memory loss as a disruptive force in romantic relationships while being deeply rooted in analog and digital technologies. As Julia presents, Lucy’s (Drew Barrymore) amnesia is counter-acted by Henry’s (Adam Sandler) video explaining her condition and their relationship. As a piece of analog agency, Lucy’s hand-written diary is presented as her own voice, in contrast to the digitization of the diary which omits all mention of Henry. When the two are later reunited, Henry’s profile remains a signature in Lucy’s art, as if the vestiges of their relationship remain despite her memory loss. Here, the removal of love from memory is a temporal displacement, leaving it intact. Love becomes the quintessence of the analog. While 50 First Dates and Eternal Sunshine were released shortly before our social media boom, which now dictates many of our relationships, Julia suggests that these films are accidentally representative of the encroachment of technology and its impact. For Julia, the impulse is not to defend memory from the landscape of technology, but to locate love from memory, a sentiment that is both oddly reassuring and strongly supported through her analysis, as she hopes to submit her completed thesis by the end of May. Sparked by those in Catherine Russell’s Archive class, correlations were later made from a recent discussion on women as representative of a sacred space for the analog.

Discussions that emerged from Julia’s presentation provided a gateway for Jordan Adler to present “They Found It At the Movies: How Four Female Film Critics Changed the Way We Think About Cinema”. Based on his background in criticism, Jordan was inspired by Meryl Streep’s comments on the lack of female critics on Rotten Tomatoes to research the influence of female critics in early cinema as his final paper for Elizabeth Clarke’s Women and Silent Film course. As those who took the course can attest, cinema became an industry built by women, and the same can be said for early film criticism. Building case studies on C.A Lejeune, Iris Barry, Bryher, and Hilda Doolittle, Jordan set out to demonstrate the significant insights into early cinema voiced by women. Film coverage may have been delegated to women as a lesser form of journalism, but these women were quick to champion film’s moral purpose and artistic merits. Before auteur theory, several female critics heralded the roles of directors and producers rather than performers, praising the likes of Chaplin and Hitchcock before their most famous productions. Soviet Cinema was preferred over local cinema, and traditional narratives ending in marriages were often dismissed. Static shots were sometimes read as manifestations of female desire, rather than the male fetishized gaze certain compositions have become understood to be. Most surprising were stances on cinema’s capacity to edify audiences and be used as a weapon, progressive concepts that were only later popularized by male theorists. As Jordan concludes, the pen of the modern critic is rooted in female voices.

For Melanie Ashe, Leonardo DiCaprio’s eco-centric Oscar acceptance speech served as motivation to continue her research into the economics of sustainable film productions. For her presentation “With great power comes great responsibility: Parsing ‘Green’ Production, Global Hollywood, and Corporate Citizenship”, Melanie uses the most eco-friendly tent-pole production, The Amazing Spiderman 2, as a case study to open a conversation on possible discourses surrounding the marketability and corporatization of eco-friendly productions. Sony hired an eco-manager during the production of the last Spiderman to work with every production team to draw up environmental plans and enforce sustainable measures—from the impact of heat emanating from computers to the re-use of sets and biodegradable snow. Since the 1990s, the Environmental Media Association (EMA) has recognized productions that meet a certain set of environmental criteria with a ‘green’ seal of approval. A multi-layered marketing campaign was created around the production of The Amazing Spiderman 2, launching an Internet flash game around Earth Hour while posting a stream of photos of Spiderman planting trees. As Melanie could attest, this behaviour is more Captain Planet than Spiderman. For Melanie, this goes beyond “going green”, displaying how a cultural production is firmly situated within economic and social context. This is a complex institutional method to rationalize a studio’s identity by improving its sense of global citizenship. Star Wars: The Force Awakens was also given the EMA seal of approval, but there is no mention of the green seal in its marketing. What is the motivation behind this seal? For now, Melanie has quite a few avenues left to explore in the emerging field of eco-criticism and green capitalism in relation to cinema, and hopes to solidify a particular stance for a future independent study.

Last but not least, Oslavi Linares Martinez presented “A Study of the Epistemology of the Animated Moving Image”, outlining possible approaches to his future thesis proposal. A latecomer, Oslavi outwardly displays the enthusiasm and high aspirations of many who enter the MA program. With a background in animation, one of the interesting approaches Oslavi wishes to undertake is an analysis of the aesthetics of data visualization, concentrating on the pedagogical construction and reception of animation. As Oslavi suggests, data visualization is not only a tool to present information—animated data allows for better comprehension of the information, making data intuitive within a global language of iconic representation. While this topic is extremely promising in theory, the Methods course will certainly help guide and narrow his concentration on a particular set of objects and the application of necessary concepts when he enrols in the course for September. The general lack of criticism and our insufficient understanding of animation should prove motivation enough for Oslavi to continue to pursue this topic, as he will be able to engage in the theoretical concepts of others to help form his analysis.

Upon the conclusion of presentations, those in attendance took advantage of the presence of colleagues who are currently writing a thesis to discuss their new experiences. While writing a thesis affords a certain amount of freedom, the consensus revealed the obstacles in maintaining a personal schedule in order to meet program guidelines…a true test of a discipline.

As we conclude every year, the feedback that these presenters received will surely be valuable as they continue to refine and research their objects of study.

Thanks to the CGFSSA for putting on another exciting symposium!

In celebration of the 5 years, here is some coverage of previous symposiums!