Saturday, September 3 was quite an eventful day and evening for the Women, Film Culture, and Globalization international conference at Concordia University in Montreal. Kicking off the early day of panels, which centered around themes of “Women’s Cinema and Gender Theory in Global Culture,” the conference’s third panel, ‘Women’s Cinema in Local/Global Contexts,’ was moderated by the conference’s director, Professor Rosanna Maule from Concordia University.

From McGill University, Amanda Holmes addressed the use of architecture and space as a reflection on director Lucrecia Martel’s own memories through the spectatorial gaze (as relating to a spectre, a ghost) of a space changed. As an allegory of Martel’s own childhood in ‘The Hotel Termas in La niña santa: Unstable Frames and Open Boundaries,’ Holmes discussed how the past can continue to haunt us, whether as memory or as spectre, even when the contours of physicality change. This was followed by Ilaria de Pascalis, from the Università di Roma Tre, and her presentation ‘Like Diamonds in the Sky, Or: Rihanna dans la banlieue. Bande de filles and the Global Pop Culture.’ Her talk addressed the learned performativity of gender as influenced by pop culture in coming-of-age narratives, particularly as a reaction to hierarchies within social circles, or cliques, in schools within marginalized ethnic communities. Julie Ravary-Pilon, from the Université de Montréal, in her presentation of ‘Women filmmakers in Quebec’s national cinema,’ analyzed the overlap, cross influence, and negation of women’s roles within the context of Quebec’s Quiet Revolution, Sexual Revolution, and its Golden Cinematic Age. Particularly striking was her analysis of the ways that the heterosexism of secular nationalism, as a patriarchal construct, can ultimately be as oppressive to women as the structures which precede it, such as the Catholic Church in Quebec. Concluding the panel was Ylenia Olibet from Concordia University, who discussed the newly embracing of the previously maligned “chick flick” genre by post-feminist theory in “’Je suis celibataire, hein, j’suis pas malade’: women’s negotiation of pain and pleasure in Les Gazelles.”

In the day’s second panel, “Rethinking Female Stardom in a Transnational Framework,” Catherine Russell, chair of the Mel Hoppenheim School of Cinema at Concordia University, delivered a paper titled ‘Barbara Stanwyck, the Bad Mother.’ Russell discussed how celebrity culture, with its emphasis on Hollywood female stars’ private life, pushes for the reinvention of female stars’ public persona in. For Stanwyck, Russell stated, such reinvention came on the heels of an exposé in the 60s, which detailed an abusive marriage and the estranged relationship with her son. Such details from her private life would eventually overshadow her work ethic and contributions to Hollywood cinema, and to the then-emerging medium of television. Following this trajectory from Hollywood, Kerry McElroy, from Concordia University, delivered ‘The Curious Case of the Maureen O’Hara; Foundation: Star Commemoration as Women’s Cinema Festival and its Problematics.’ This talk dissected the troubling and abusive working and personal relationship between O’Hara and auteurist theory favourite John Ford. By analyzing power dynamics between the female actor and male director against the representation and performativity of Irish ethnicity, McElroy unveiled how the contemporary Irish culture industry has tended to favour the American-born male director with Irish lineage over the Irish-born female actor. Concluding the panel was Sabrina Vellucci from Università Roma Tre with “‘Unhomely’ Domesticity in Nancy Savoca’s Household Saints and Dirt,” which discussed issues of femininity, Catholicism, and ethnicity within Italian and Latin-American diasporic communities in North America.

The 2:30 panel, “Female Film Auteurs in a Global Context,” showcased three women directors from wildly different industrial and aesthetic contexts. Starting in the Hollywood setting, Enrico Carocci of the University of Roma Tre delivered his talk ‘The Configuration of Affect in Katheryn Bigelow’s The Hurt Locker and Zero Dark Thirty,’ arguing that Bigelow’s affective avoidance of character identification or clear gender binaries challenges standard post-9/11 U.S. rhetoric of “protective paternalism.” Maria Anita Stefanelli, also of the University of Roma Tre, then shined light on the work of independent director Shirley Clarke in her talk ‘Project Shirley: Jason in Feathers.’ Stefanelli focused on Clarke’s 1967 biographical doc Portrait of Jason, a patchwork of interviews with Jason Holliday, a gay, black hustler. Clarke’s candid approach to Jason’s race- and sex-tinged commentaries helped elevate an underprivileged voice on the margins of society, a purpose Clarke, an outsider herself, took seriously. The final paper, by Somayeh Ghazizadeh of the Tehran Academy of Art, was titled ‘A Glance at the Documentary Films of Rakhshan Bani-Etemad: The Interpreter of Maladies.’ Her talk, which began with a filmed greeting to conference attendees from Bani-Etemad herself, discussed the documentary work of this “First Lady of Iranian Cinema” and her dedication to tackling social and political issues through films such as I’ll See You Tomorrow, Elina, All of my Trees, and We Are Half of Iran’s Population.

The day concluded with a screening of Ulrike Ottinger’s Madame X: An Absolute Ruler (1977) at the Cinémathèque québécois. The film was introduced by Patricia White, who described the director’s work as expressively sui generis, and by Thomas Waugh, who shared anecdotes from the film’s screening during the 1982 Gay and Lesbian Film Festival in Montreal. The film, a post-sync sound, highly aestheticized pirate film, could perhaps be best defined (if at all) as an OrientoPunk, psychoanalytic, Queer critique of power dynamics in asymmetrical relations, whether sexual or laboral. In the QA which followed, the director discussed the film’s oscillation between seriousness and playfulness within the context of 1970’s art  and queer cinema. 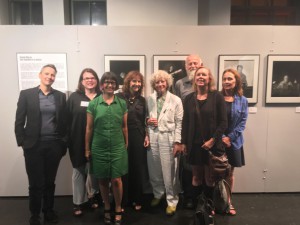