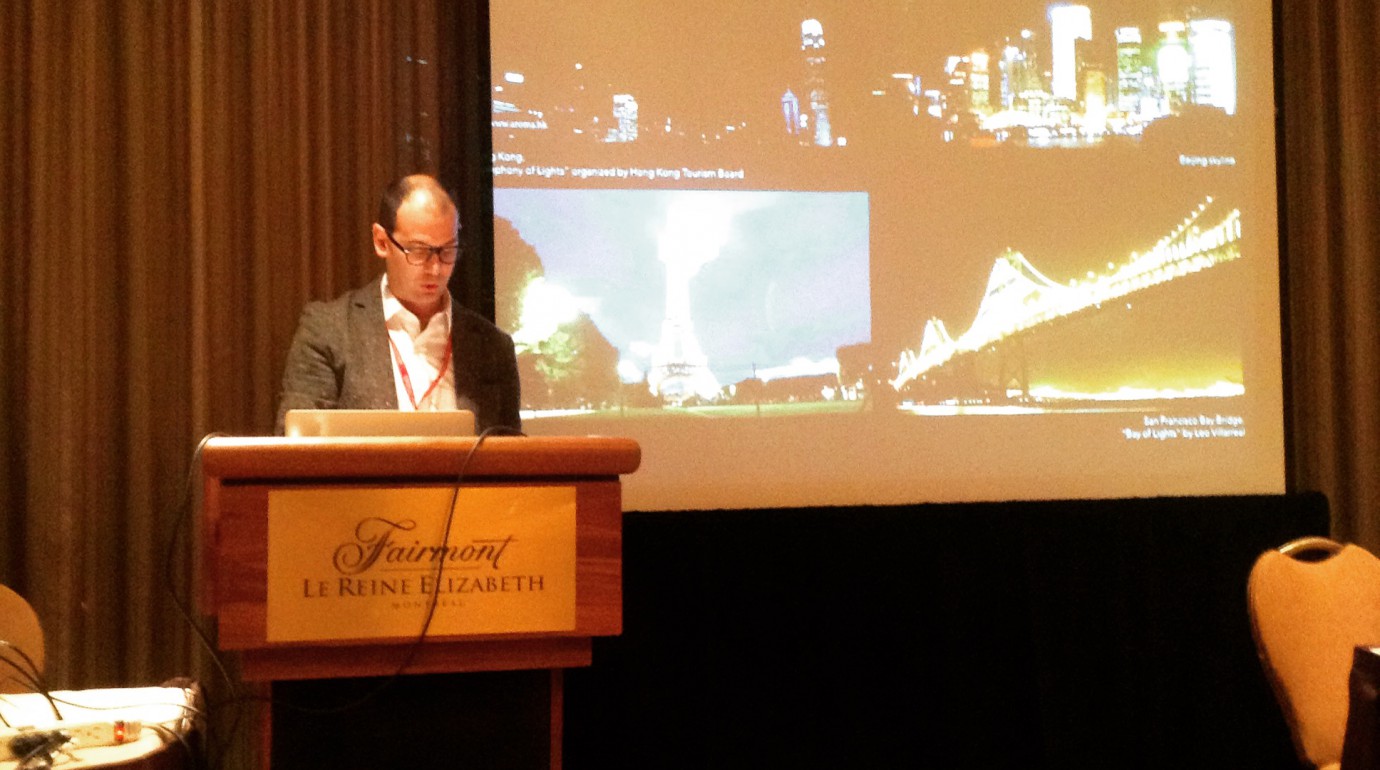 Sponsored by the Urban Studies SIG, Zach Melzer (Concordia University), Dave Colangelo (Ryerson and York University) and Annie Dell’Aria (CUNY) presented their papers during a panel titled, “Making Habits and Breaking Habits: Moving Images in Monuments and Heavily Screened Urban Media Environments.” The three panelists, who discussed their work together previously, addressed and questioned how urban spaces and monuments transform with the increased use of the moving image.

The first paper, “Making Habits and Breaking Habits in Urban Media Environments,” was presented by Zach Melzer. He proposed that although we have become accustomed to seeing screens and moving images everywhere, these screens actually manifest in very specific zones or locations. He argued that greater attention should be given to why these screens appear in some places and not others, and that their appearance is a deeply regulated activity. Melzer chose to focus his paper on two outdoor spaces: the square kilometre that makes up Montreal’s Quartier des spectacles and the two dozen blocks that surround New York City’s Times Square. He began by breaking down the screen make-up of each district. Times Square is made up of 70 LED screens densely located in the bow tie, which consists of one-third of the area. Quartier des spectacles, on the other hand, is made up of 8 screens projected onto building facades. These screens, covering 1% of the area, are more sparsely located and only show non-commercial content.

Quartier des spectacles, Melzer explained, was built on a government mandate to reinvigorate the artist district, and to embrace Montreal’s bohemian spirit, as it cannot compete with New York City. The municipal government expressly wants to avoid the super-commercialization that appears in Times Square at all costs. Melzer explained this mandate was based on Richard Florida’s concept of the ‘Creative City’ and a desire to shape Montreal into a creative industries centre. He suggested that while this project appears progressive, it can also be read as an articulation of modern neo-liberalism. Melzer continued by discussing the re-invigoration of Times Square, which was prompted by the large amount of crime and grindhouse and porn theatres on 4nd Street between 7th and 8th Avenue in 1980s. New land values and zoning laws around Times Square lead to the increase of office towers and presence of the information class. These changes were met with outrage from various groups who feared Times Square would lose its glitz and glam. The solution to this, Melzer explained, were special zoning laws that detailed that buildings must incorporate illuminated signage. To conclude his paper, Melzer explained that screens are integrated into urban spaces due to economic, cultural, and even personal biases.

Melzer was followed by David Colangelo, who present a paper titled “Massive Media: The New ‘New Monumentality’ in Urban Media Environments.” Colangelo discussed how monuments are becoming more like screens and even how more monuments are screens. He asked how these screens as monuments activate spectatorship and if these monuments bring liveness into public spaces. Annie Dell’Aria concluded that panel with her paper, “Never Forget, Never Remember: The Texture of Media in Contemporary Memorials.” Drawing from Erika Doss’s book Memorial Mania, Dell’Aria discussed the urge, particularly in the United States, to memorialize public events. She explained that more and more of these public memorials incorporating or becoming more like screens. The panel, followed by a lively discussion period, was extremely insightful and asked us to reconsider how we view screens in public spaces.