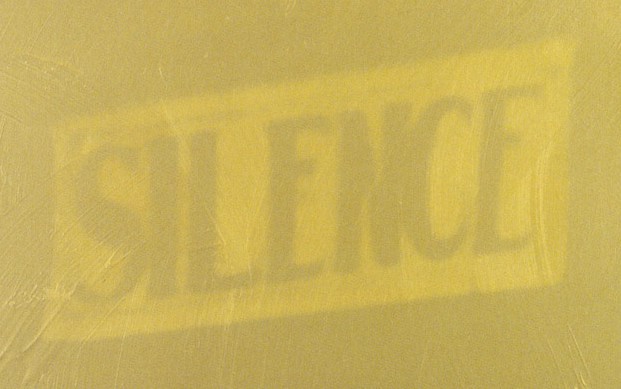 “Silence itself—the things one declines to say, or is forbidden to name, the discretion that is required between different speakers—is less the absolute limit of discourse, the other side from which it is separated by a strict boundary, than an element that functions alongside the things said, with them and in relation to them within over-all strategies. […]There is not one but many silences, and they are an integral part of the strategies that underlie and permeate discourses. (Michel Foucault, The History of Sexuality Vol. 1: An Introduction1)

Silence plays the irreducible role of that which bears and haunts language, outside and against which alone language can emerge. (Jacques Derrida, Writing and Difference2 )

What is silence? How is it kept or broken? Silence is often used to describe who and what is repressed and subjugated: “being silenced” and “not having a voice.” This conference aims to explore the relations between silence, the unspeakable and the unheard, as well as the ways in which silence is represented, interpreted, and subverted.

John Cage visited Harvard University’s anechoic chamber in 1951, a year before composing his silent piece 4’33”. In this room that muted all environmental sounds, Cage heard the low and high sounds of his blood churning and his nervous system rushing: “There is no such thing as silence. Something is always happening that makes a sound.”3 Cage’s denial of the absence of sound and consideration of contingent sounds reveals the pervasive rhythm of life and the impossibility of silence.

The “linguistic turn” in contemporary philosophy exposed silences by attempting to elucidate the limits of language and intelligibility. If we consider silence to be a moment in language, rather than something which lies outside of it, how can we interpret and listen to silence? In the Preface to his Tractatus Logico-Philosophicus, Ludwig Wittgenstein writes that “What can be said at all can be said clearly, and what we cannot talk about we must pass over in silence.”4 Although he denies that ideas that cannot be reduced to logical states of affairs can be meaningfully expressed through language, Wittgenstein recognizes that these silences can be expressed through means other than language. The limits of language outlined by Wittgenstein shed light on the exclusionary powers of speech and communication, and the ways in which silence and discourse are strategically employed in power relations.

As Derrida points out, silence is the source of all language. Rather than positing silence as an absolute negation of speech, Derrida suggests that it is a necessary condition for the possibility of meaning. Listening to the haunting echoes that lie on the horizon of sound, just beyond our hearing, entails perceiving the absences that allow sounds to be heard. Nevertheless, silencing often operates as a tool to establish power and exclude. Theorists and philosophers such as Derrida, Gayatri Chakravorty Spivak, Homi K. Bhabha and Edward Said have sought to reveal the epistemic silences of our social and political structures. If silence has become a form of quiet consent in an age where power and language are one, how can we rethink silence as an expression of resistance or subversion? By creating a silent space where the voices of the “unspoken” can be heard, how can silence resist and subvert dominant discourses? How can we be attuned to the cacophony of silences and their multiple meanings?

-Silenced Subjectivities
-Feminist/Critical Race Theory Critiques of Language and Considerations of Silence -Silence as Exclusion and/or Violence
-Silenced Histories
-Quiet Forms of Resistance
-Body Talk/Body Language
-Political Silence and Political Silencing
-Sounds and/of Silence
-The Aesthetics of Silence
-Silence and the Urban Soundscape
-Silence and Architecture, Visual Art, Cinema, Dance, Theatre and Performance. -The Practice of Censorship/Anonymous Authorship
-Considerations of Deafness and Disability
-The Time of Silence
-Critiques of the Concept of Silence

The 2015 Art History and Communication Studies Graduate Student Conference will include the participation of the department’s faculty members. We invite graduate students, academics, artists, activists, and independent researchers to submit 20 minute conference paper proposals. Paper proposals (max 500 words) should be sent to ahcs2015@gmail.com by March 1st, 2015.