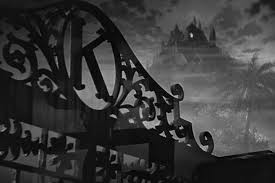 Not even an an ill-timed fire drill in the EV Building could dissuade a strong turn-out for Kristopher Woofter’s PhD thesis defense on Friday, Sept. 30, 2016.  Titled “Shoot the Dead: Horror Cinema, Documentary, and Gothic Realism,” Woofter’s work examines several films stretching from the 1940s to the present that he claims use “sublime Gothic realist techniques” to trouble their historical moments and complicate notions of “the real.” At heart is a questioning of the relationship between the Gothic and documentary, and how the Gothic provides entry points into related issues like “illusion, pleasure, and unrepresentable subject matter.”

Woofter’s chapters focus on different time periods or modes of cinema to unfurl an argument about the usefulness of a Gothic frame of reference. His first chapter spotlights how Gothic realism helps hybridize 1940s Hollywood classics, which tend to get shoehorned into particular genres that lean on comprehension and closure. His second chapter examines films “as conceptual sites that bring Gothic strategies to the documentary” by defamiliarizing the everyday, including Capturing the Friedmans (2003) and The Hellstrom Chronicle (1971). His third chapter brings the Gothic to our keyboards by asserting that recent “found-footage” horror films about “the ubiquity of image-capture technology,” such as Unfriended (2014), make readable Gothic-infused “technological hauntings” of our web-based realities. Woofter’s concluding chapter raises the 2012 documentary Leviathan, about the North American fishing industry, as a film whose sensory overload produces an “affective resistance to closure” in keeping with the Gothic tradition towards ambiguity.

Two rounds of committee questioning followed Woofter’s presentation. While heaping general praise on the project for its imaginative reading of Gothic sensibilities among a range of texts, some members questioned the all-encompassing use of phrases such as “collective anxieties of wartime America,” which could have been nuanced more for sharper analysis. There also emerged the issue of whether Woofter’s study, which draws from nineteenth-century American Gothic literature as a touchstone, could have made room for more contemporary representations of the Gothic, such as the True Detective series or Stephen King’s writing, and whether later iterations of the thesis would expand from its U.S.-centered focus. But these were minor concerns set against large-scale praise for the thesis and its applicability to the field(s) it concerns.

A hearty congratulations to Kris!