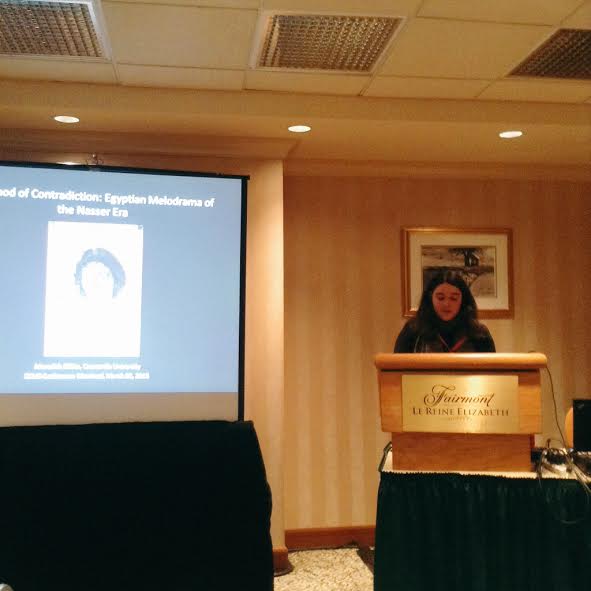 On Saturday afternoon, Mel Hoppenheim PhD candidate, Meredith Slifkin chaired the panel titled “Global Melodrama: Theories, Histories, Methods.” She introduced the panel by explaining that the aim of the three papers were to explore the notion of melodrama as a global mode. The first panellist, Carlo Marcantonio (George Mason University), presented a paper titled “Biopolitics and Melodrama: The Body beyond National Identity.” Marcantonio’s paper aimed to rehistoricize melodrama and its relationship to the modern nation.

Meredith Slifkin followed with her paper titled “A Method of Contradiction: Egyptian Melodrama of the Nasser Era.” She began by explaining that although Egyptian cinema has wide circulation in the Arab speaking world, it is often marginalized in the west. She stated that the aim of her paper is to trace a global melodramatic current, and to examine the tradition of melodrama that is tied to the female figure and nationalism. The method of contradictions and collisions, as the title suggests, occurs at three levels of discourse: the melodrama as a genre, the Egyptian melodrama, and the melodrama as method.

Slifkin presented two films as case studies for her analysis: Henry Barakat’s Open Door (1964) and Abu Seif’s I Am Free (1958). Explaining that these films contain revolutionary discourse in the narrative, Slifkin outlined the role of the Egyptian woman, who has been taken out of the home and presented as a new symbol of nation building. Citing Viola Shafik, she argued that these overtly feminist projects, such as education and professionalization, in service of the nation flatten the expression of the individual female experience. The relationship between the young female and the mother figure is problematic in these films, as it often signifies a clash between tradition and modernity.

Slifkin argued Nasser’s Charter uses the discourse of melodrama. Here, she connected this with Peter Brooks’ discussion of the French Revolution and theatre. She stated, however, that western melodrama theory cannot simply be applied to the Egyptian context, but rather it can provide tools for dealing with the generic. The films in her case study appear to display globally legible qualities, but in some cases they do not translate. Love and marriage, for example, take on different meanings in different contexts. She proposes contradiction as a method. Once again citing Shafik, she explained that reading Laura Mulvey’s writing on melodrama would not translate, as her discussions of gender would appear orientalist. To conclude, Slifkin explained that to find the global structures at work, difference is to be acknowledged and made productive.

Rachel Schaff (University of Minnesota) followed Slifkin with a paper on the Czech Feature Film volumes and archive. Her paper, “Home Is Where the Heart Is: From the Family to the Nation in Czech Film Melodramas, 1930-1950,” looked at how films that could retroactively be read as melodrama were categorized in these five volumes. The respondent, Anupama Kapse (Queens College, CUNY), praised Slifkin for the concept of ‘The Melodramatic Vernacular’ as a tool for dealing with the generic qualities of these films. The panel concluded with a lively discussion period, includng a contribution from Linda Williams. Williams asked the three panellists what they would keep and what they would throw away from Brooks’ understanding of melodrama.