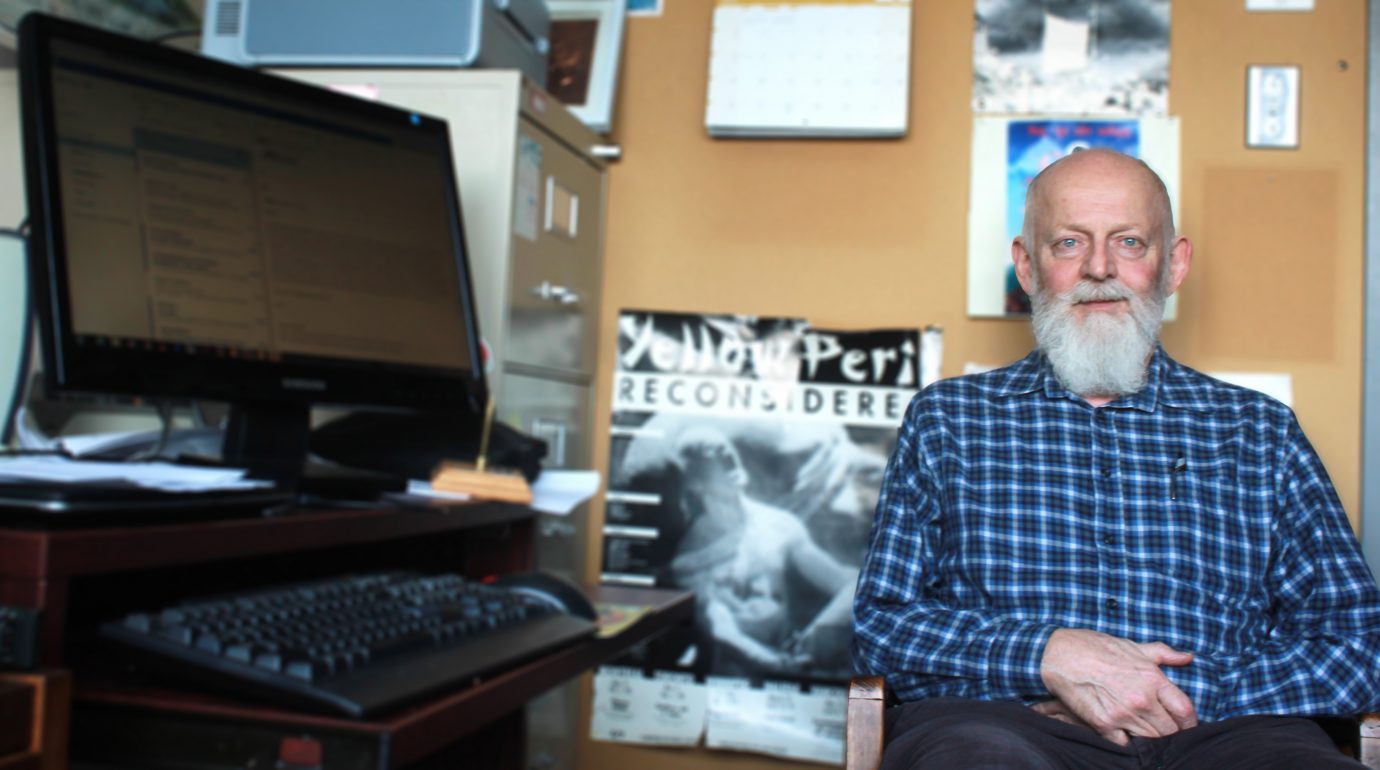 Read on for some of Dr. Waugh’s reflections on his more than 40-year career, why academia is needed now more than ever, Turkish bathhouses and more.

Masoumeh Hashemi: You were born in 1948 in London, Ontario, and after you took your BA in English Language and Literature in 1970, you went to New York to study Film. Why the United States and why Film?

Thomas Waugh: It had to do with the period. I was very unhappy as an English Major, so after I finished that degree I went to India for two years to teach English, to discover the world and decide what I wanted to do. And then over there, I decided that I would like to switch to film, because it was more relevant to my interest in culture and society. I found English literature too esoteric and academic. I thought Film was much more engaged.

M: You’ve put your life in academia and research, and you touch some very evocative fields and ideas, and you have created great resources on them. It is true commitment, in my view. How is it living like this?

T: I’m very privileged and I’m very lucky to have had such a job that brings me in touch with students, and a renewed group of students every year. Being committed is very much a part of the teaching, so I try to teach with that object in mind, to express teaching as part of an engagement with the world, and also, my research. So, I’m very lucky to be able to do that to follow my personal principle in my work, because many people cannot. I’m very lucky.

M: After graduating, you came to Concordia right away, correct?

M: Why Concordia and Montreal? Because you are not Quebecois, so why did you choose to come to Quebec?

T: In 1976, my money ran out. I was maybe one year into my dissertation, so I had started my doctorate research but I was out of money, so I had to move back home. I applied for jobs available in four different universities in Canada and I was interviewed in all of them, but Concordia was the only job I got. The others were Ottawa, Kingston and Winnipeg, I’m very lucky I didn’t get any of those other jobs. I’m very lucky I got the Concordia job. It was a very small cinema program at the time. I was the third faculty member; two in film studies, one in film production. And I’ve been here ever since.

M: You are retiring now, just as the Trump era begins—do you have any word for the new generation of students who come to academia seeking change?

T: I think in any era the intellectual has to take a stand and engage in struggle. And in the Trump era, even more so. There is a danger that humanities is seen as less important than other fields in terms of political action and political struggle that in my opinion is very important. In Film Studies is pretty clear how this is the case, where we are lucky to have colleges like Ezra [Winton] and Kay [Dickinson], and some of the others like Katie [Russell] and Peter [Rist]. These, and others share this view of Film Studies as an engagement with the world.  Ezra’s commitment to programming is an example of how we can use our discipline to move out beyond the University walls and connect with real world and people and audiences. It is very important.

M: Did you ever lose your faith in academia?

T: No, I’m pretty lucky here at Concordia because it’s a friendly institution and people matter, individuals can express their agency within the institution. It’s very bureaucratic but not overwhelmingly, staggeringly bureaucratic. You get to meet people in the institution and you can do things together. So, sometimes the bureaucracy is maddening and sometimes in a community there are conflicts and inter personal challenges. But I think over the last decade in cinema, here we’ve been very lucky about how resourceful and resilient the community is.

M: Last semester, the first day of our Cinema Quebecois class you asked us about the film which we’ve watched the most. What is yours?

T: (laughter) I haven’t been going to as many films as I would like recently, because I’ve been too busy, but every Monday night I go to Cinema Politica to see what they are showing. That is very important to me to stay in touch with engaged, committed documentary. I almost never go to the films alone, I go with friends, so it’s always a collaborative decision as to what film we would go to. For example, one friend dragged me against my will to Manchester by the Sea which won an Oscar for the male performance. I felt quite impatient at the film, but I’m glad to have seen it. It’s an example of, sort of, Liberal Hollywood trying to explore human emotions and working class people. So, I’m glad that my friend forced me to see the film. Sometimes, though, it’s very hard to persuade some of my friends to go to the films that I really want to see. For example, I missed this film, this Quebecois film Those Who Make Revolution Halfway Only Dig Their Own Graves. I really wanted to see it. It’s about the student’s revolt in 2012, the Printemps érable. But I missed it, I haven’t been able to see it.

M: But you still can watch it.

T: Yeah, but I like going as a part of an audience, in a community and in a friendship network. But I’ll catch up with it, yeah! Are you asking what my favourite films are?

T: Oh, they change all the time. But there is one film that I’m showing here at Concordia on April 1st, Arabian Nights.

M: I love that film.

T: We just published a book on this in the Queer Film Classic series. I’m the co-editor with Matthew Hays. There have been 15 books [in the series] and the new book is Arabian Nights. We are launching it here at Concordia on April 1st, so you should come!

T: A lot of it was shot in Iran, did you know this? In Isfahan, I think?

M: Yes, in Isfahan’s Imam Mosque which was called Shah’s Mosque at the time of the film.

M: True, Isfahan has one of the most indigenous architectures of Iran I think, and this mosque is one of the main monuments of that kind in the whole country.

T: I think normally this film is considered to be part of an Orientalist tradition. But as an adaptation of Persian and Arabic literature, originally Medieval Persian and Arabic literature, I think it is an interesting example of East and West talking back to each other. But I’m sure lots of people from Iran and from Arab cultures must hate this film. I don’t know, but I think the last word has not been said in Orientalism. I think we need to think more about exchanging and hybridity and dialogue. So, for me this film exemplifies that.

M: I don’t know about the reception of the film in Iran, but it must have been received quite problematically, I think, due to our socio-historical and religious background. But we need another Pasolini to be born to continue that discussion of Orientalism in film.

M: If one can watch one and only one film before dying, what would you suggest?

T: Teorema also by Pasolini. I also love Visconti, you know him?

M: His name sounds familiar, but my memory does not help me with names. I need visuals to remember.

M: Yes, now I know who he is, but no Tom, I have not seen this film. You know, whenever I talk to you, there is another film to add to my “to watch” list!

T: [laughter] I think I would insist on a whole curated program of 20 films

T: I would want to include some Canadian films… It’s very hard for me to answer this question Masoumeh.

M: Yes, I understand. I still have a list by you to catch up with. In Romain Gary’s Goodbye Gary Cooper one of the characters, I think it was Lenni, says that it is the snow which makes life worth living for him. Do you have such a feeling toward anything?

M: Ham’mam? What is it? It sounds like an Arab word with the same meaning in Farsi.

T: In Farsi what is this word? In Arabic or Turkish, it’s Hammam.

M: It means bathroom, a place to bathe. The word is originally Arabic but it has entered Farsi with the same meaning.

M: You should come to Iran, Tom!

T: No one ever invites me.

M: I will! But seriously why Hammam?

T: It is a beautiful, wonderful, sensual experience. It is also very communal.

M: You’ve been in such a place in India or somewhere in Asia?

T: Once in India, but the closest I’ve come to your country was Turkey. And of course, in Turkey there’s one of these places on every corner. So, I went to one every day in Turkey.

M: Tom, thank you for your time. It is always nice to talk to you. You are retiring this year, so next fall, you will not be teaching here?

M: But you will be at Cinema Politica every Monday?

M: Okay Tom, Thanks! See you then!