In what looked like the academic equivalent of a rock concert, Le Grand Salon at the Fairmont Hotel was filled to the brim for this panel on movement and volume in the film image. Presentations were slightly delayed as people kept pouring into the Salon with chairs they borrowed from the neighbouring rooms, while others simply decided to sit on the floor wherever it was possible. Additionally, and because of this unexpected influx, a microphone had to be installed to help the presenters reach every ear in attendance. Despite the missing microphone, Tom Gunning (University of Chicago) started his presentation with great energy and enthusiasm. Gunning’s paper, entitled “Rounding out the Moving Image: Camera Movement and Volumetric Space,” aimed to illustrate one of the main functions of camera movement, which is too often overlooked by those working of the moving image. The function in question is that of revealing the volume of what are typically only seen as flat objects within the two-dimensional cinema screen. Gunning—along with André Gaudreault and Elena Dagrada—had introduced this idea of camera movement and volumetric space in their 2000 text “Regard Oblique.” Gunning’s presentation, therefore, aimed to reiterate this quality of the moving image. One of the ways in which this was achieved was through a historical overview of some formative moments in early camera movements. Additionally, Gunning called on Vivian Sobchack’s concept of “intentionality” in order to move away from the typical narrative readings of camera movement and to propose the idea of “undirected” movement. Later, when I asked Gunning about his seemingly contradictory Sobchack’s concept, his response clarified some of the theoretical foundations behind his paper (based more on Husserl’s original notion of intentionality rather than Sobchack’s own interpretation which he admitted is problematic). 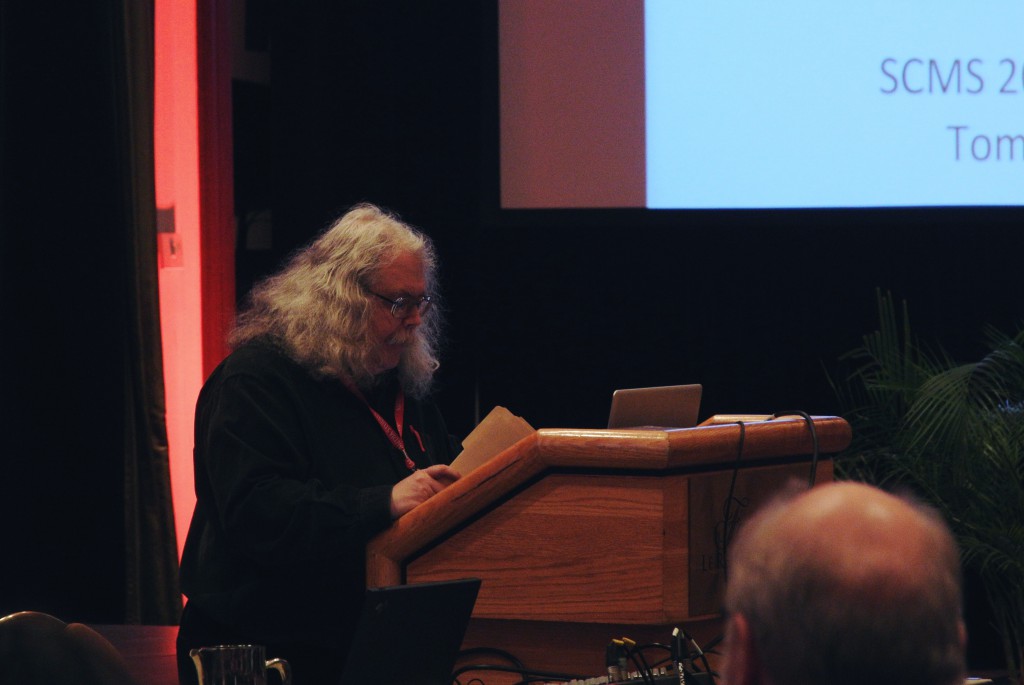 Following Gunning, Mary Ann Doane (UC Berkeley) presented “The Trope of the Turn and the Production of a Third Dimension.” While Gunning’s paper was interested in the volume that is given to on-screen space through camera movement, Doane’s focus was on the space of the spectator within the theatre and within the dispositif. Notably, Doane’s presentation addressed the problem of spectators coming in contact with the space around and behind them. With several examples of experiments in sound technologies (including the recent Dolby Atmos), this paper suggested the special relation between sound and the spectator’s embodied position in theatrical space. Interestingly, all throughout her presentation, I noticed a series of subtle “nature sounds,” which, in my opinion, served as an interesting proof of the points proposed in the paper. These sounds most likely came from the Dolby Atmos website (that was used later in the presentation and which featured such sounds), however I’m not sure that Doane had planned this sonic background, since she made no reference to it throughout her presentation. Whatever the case may be, these sounds made me look around to find the source of the apparent disturbance, effectively proving the Brechtian effect of the “turn” Doane mentions in her title. 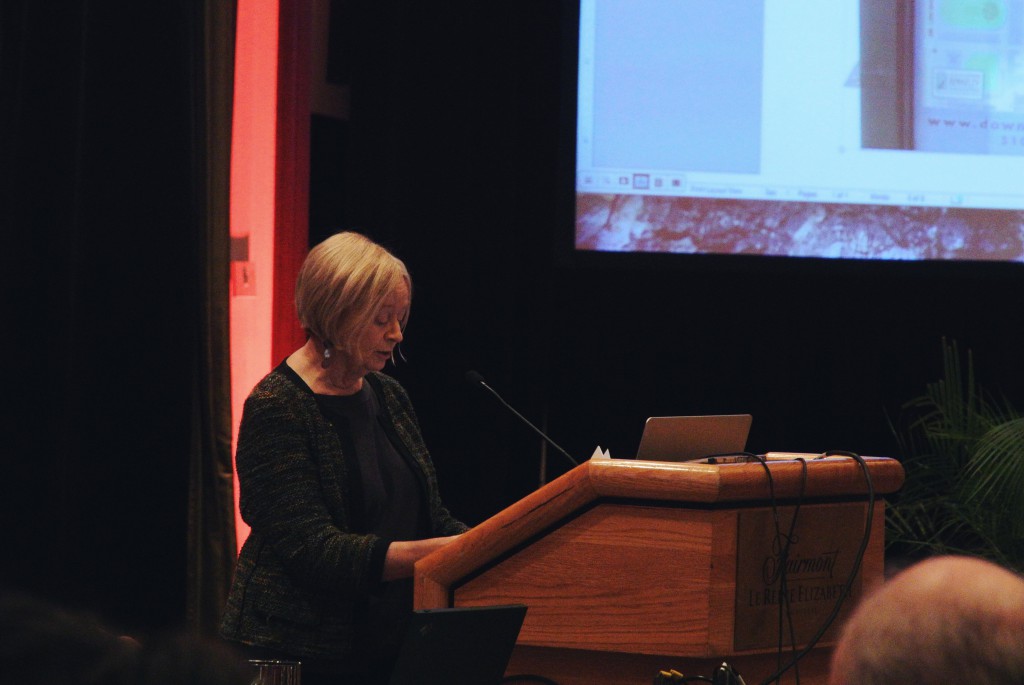 The final presentation (since Dudley Andrew could not make it to Montreal for the conference) was given by Kristen Whissel (UC Berkeley), who also chaired the panel. Her paper, “Parallax Effects: Epistemology, Affect, and 3D Cinema,” used Gravity (2013) to illustrate the potentially disorientating effects of stereoscopic 3D. Of course, Whissel noted that despite her use of clips from Gravity, it would be impossible for us to perceive the particular effects her paper dealt with, since we had no way of properly projecting or viewing the stereoscopic images. Nevertheless, Whissel’s evocative descriptions meant one could reasonably imagine these effects, particularly if one had already seen the film in all its 3D glory. Whissel’s use of Gravity, as a film that takes place in space, aimed to eliminate the possibility of viewers to rely on the horizon or other common spatial markers. Stripped of these points of references, we can begin to see the dimensionality that 3D in itself gives the image. Additionally, one of the points Whissel made during this presentation was the epistemological concerns that the film brings to mind. With its use of CGI, motion control, stereoscopic 3D and with its narrative of surveillance and communications, Gravity suggests that our relation to information and the truth is a problematic one, to say the least. 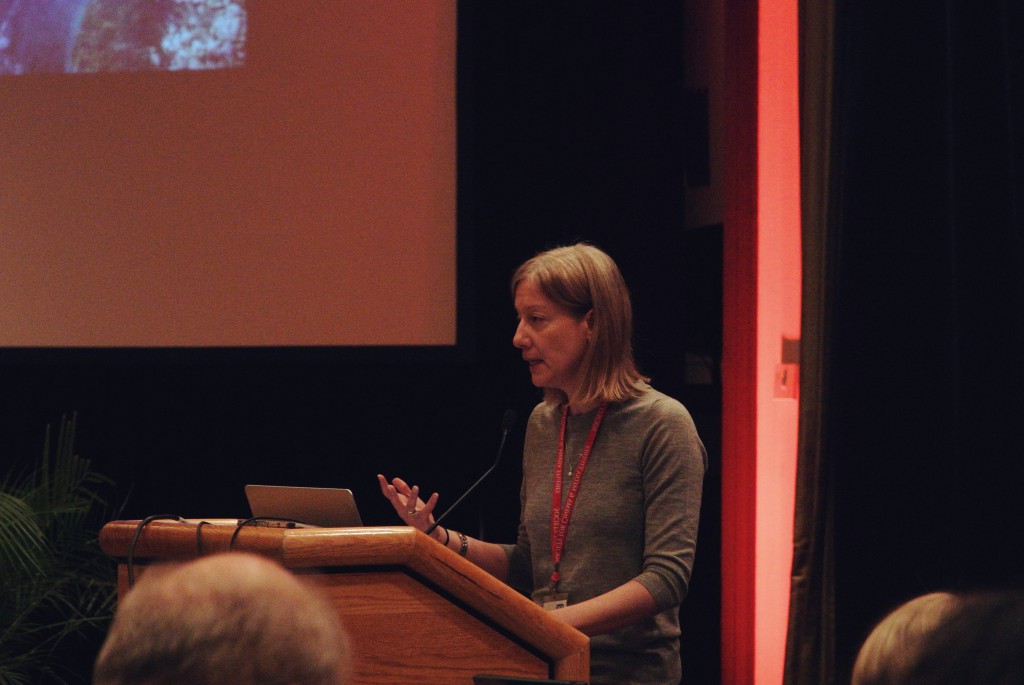