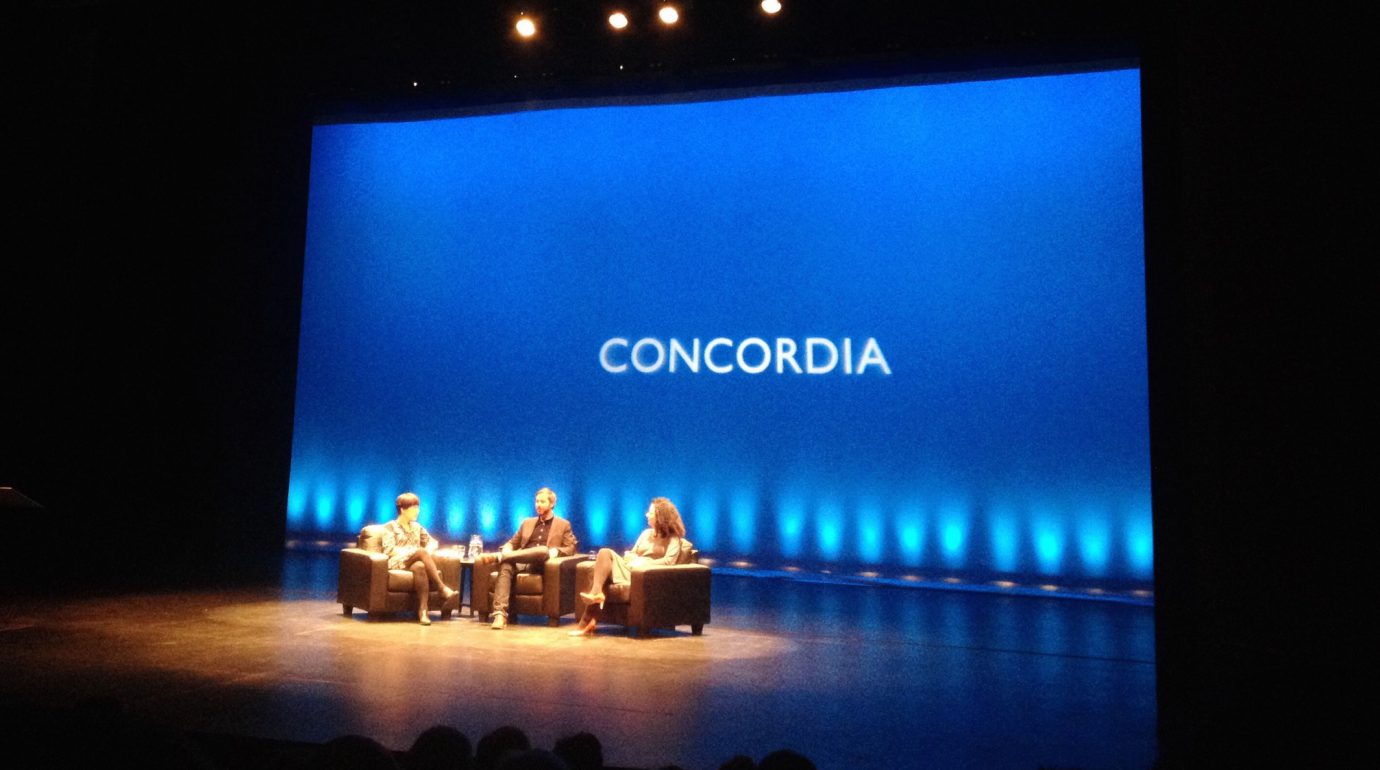 The theatre was packed as classic television themes played over the speaker system for the latest in the “Thinking Out Loud” Series, a partnership between Concordia University and The Globe and Mail. Taking place on February 9th, the event saw Mel Hoppenheim’s own Joshua Neves in conversation with The New Yorker’s television critic Emily Nussbaum, discussing the cultural-state-of-the-field in regards to television today, as well as asking the question: “What makes television important now?”

Opening the conversation was Hannah Sung, co-creator of The Globe and Mail’s podcast Colour Code, and moderator of the evening.

‘What is television?’ was the starting point and proved to be a difficult question to answer, revealing the breadth of approaches and scope between Nussbaum and Neves, and their varying roles of cultural critic and cultural scholar. Nussbaum is interested in questions of formal style, narrative experimentation, and television as art. Focusing more specifically on the North American context, she argues for television’s increasing ability to tell interesting and diverse stories in the contemporary digital landscape.

Alternatively, Neves is interested in anything but the television text itself, focusing on global patterns of televisual distribution, infrastructure, and site-specific models of watching. Citing screens on public transport, or piratical viewing practices as examples, Neves’s body of work has always attempted to find objects of study that are beyond the popular western-centric understanding of media.

Despite this breadth in approach, the general consensus is that in recent times, the television arena can no longer be confined to an understanding that sees it defined by what is broadcast by the TV box itself. Instead, TV has developed to include various online subscription-based services, video on demand, and other new sites and spaces for watching.

Nussbaum, who is interested in questions of representation and diversity on television, views this contemporary shift as a positive one. She strongly claims that recent times have seen some of the most ambitious and risky television produced to date. Yet, this is not an uncritical appraisal of the grand and popular successes of recent HBO shows such as Westworld or True Detective. In fact, she has often vented her frustration about the patriarchal prestige drama of commercial television, citing those HBO shows and others as guilty of perpetuating a white, hetero-patriarchal narrative that while quickly becomes incorporated into the TV-canon, still leaves something to be desired.   Alternatively, Nussbaum sees her role as spotlighting alternative television content that is thematically daring, especially when it comes to race or gender-based representation.

In the current digital landscape, the question of ‘time’ has never been more crucial to television, Neves claimed. With television’s tight production schedules and often fast-track release, criticisms of the show, or commentaries on actual world events, can be incorporated into the content of a series in a real-time context. As a result, television has the ability to be more embedded in the every day than other forms of media, such as cinema.

In addition, devoted watchers of television develop long-term relationships with many characters, as characters, industries and fans have opportunities to grow together. Depending on patterns of distribution and infrastructure, the questions of ‘space’ can also assemble various audiences from around the globe together. In a course on Global TV taught by Neves, students from nine different countries could find commonalities in what was broadcast on their local television stations, as diasporic populations in various parts of the world are connected via informal economic, distribution, or infrastructural arrangements.

The evening wrapped up with a question regarding the future of television. Recent episodes of the technological dystopia Black Mirror do not provide a positive omen when thinking about the consequences of our familiar media soaked landscape. Nussbaum, a US citizen unsure of the current political and social climate, was reluctant to focus on predictions, instead advising to “just focus on surviving.” Neves, on the other hand, believes the future will be “somewhere between the first episode of the new series of Black Mirror, and a more utopian and technophillic prediction of what TV and media can do.”

Current television series given the thumbs up by both speakers were: Fleabag, Chewing Gum, Please Like Me, Black Mirror, Rectify, Sense8, and Boys over Flowers