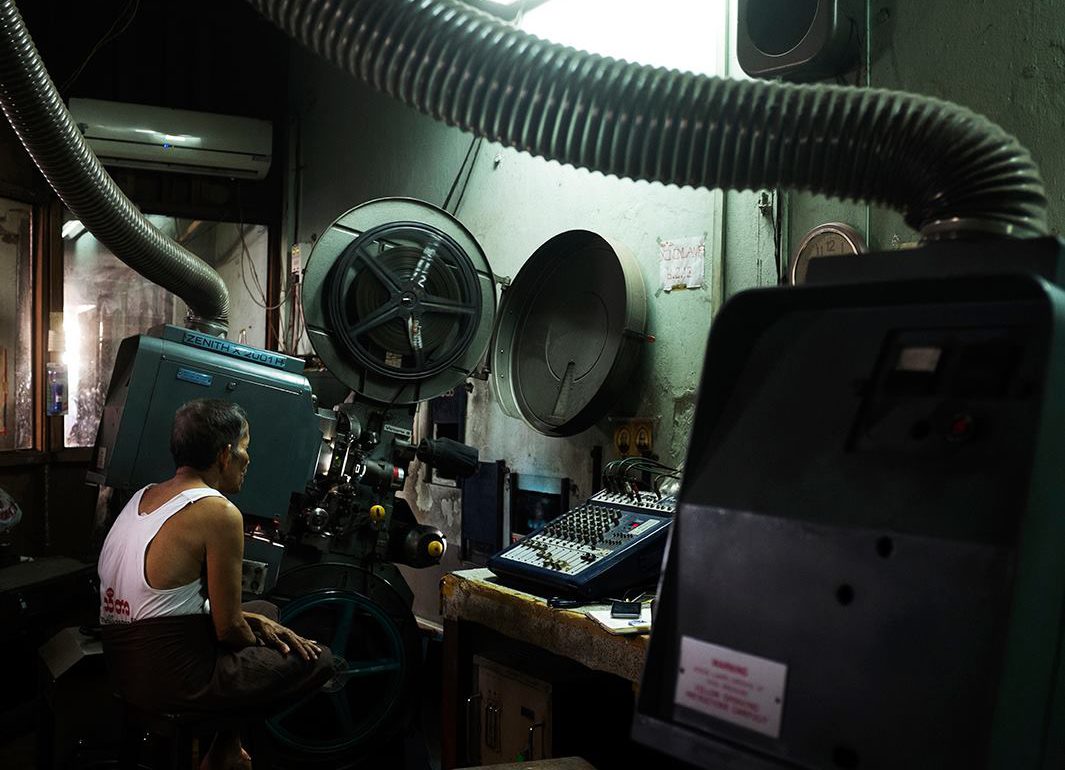 This project aims to present fragments of Yangon (Burmese/Myanmar) filmmaking as “production worlds” that are organized by 1. social roles and aesthetic conventions, 2. multiple and concurrent processes of transition, and 3. a renewed nation-building project under globalization.

A production world describes how actors collaborate using specific conventions and how they shape their own social and professional norms. In Yangon, membership in the filmmaking community implies specific commitments to various government agencies, INGOs, professional organizations, cliques, and other associations, organized around the production and exhibition of locally-made films. These commitments are indispensable conditions for work, and imply a set of standard strategies and structures of cooperation. However, conventions are constantly subject to change as the Union of Myanmar is re-ingested into the global economic system. As film production attempts to reflect the perceived needs of the public, it fractures into many sub-worlds: indie, mainstream, arthouse, foreign co-productions, festival films. A long tradition of local direct-to-video genre films, soap serials, and popular cinema is quickly disappearing, while young Burmese filmmakers are groomed, thanks to international attention, to ‘auteur’ their country’s future. At the same time, transnational VFX companies and foreign-funded production houses are quietly repositioning their global weight onto local territory, undoubtedly in anticipation of lifting it from some other location. Thus, the conventions that hold a national film industry together are rapidly crumbling away, contested by groups seeking differential ends, making differential claims, and re-ordering the pieces according to the ends each wishes to achieve.

Through interviews, the project seeks to understand the structures of Yangon filmmaking by presenting it as a procedural, collective, but also transforming world of production. Approaching this as an outsider, via continuous but in many ways limited interactions with Yangon filmmakers, the perspective of production worlds allows Theo to get a sense of who participates in processes of production, circulation and consumption of Myanmar films, however important or modest their participation may be, by presenting glimpses of how things are done, the identities of those participating, the exchanges, transactions, and cooperative or agonistic relationships that develop, as well as the negotiations taking place.

Theo will also, briefly, talk about some of the tools with which he has shot, recorded, and organized his footage, and go over the various glitches encountered in the process of conceiving this project as an interactive documentary essay.

Theo Stojanov is a sound engineer and media researcher based in Montreal. He is currently a doctoral student in Film and Moving Image Studies at Concordia University, where his research involves a critical examination of the socio-technical aspects of the creative industries, their production practices, policies, and people.

About WIP:
The workshop is meant to showcase new and developing projects by the Fine Arts graduate community (and beyond), creating a space for interdisciplinary critique and feedback. Encouraging the engagement of workshop participants, the emphasis will be on research methodologies and future directions. We aim to create a space for alternative methodologies and practices, investigating research trends in the humanities such as visual anthropology, digital ethnography, field recording and sound experiments, approaches to information technologies, and other on the ground research practices.

For more information on this and future workshops, visit: https://www.globalemergentmedia.com/events